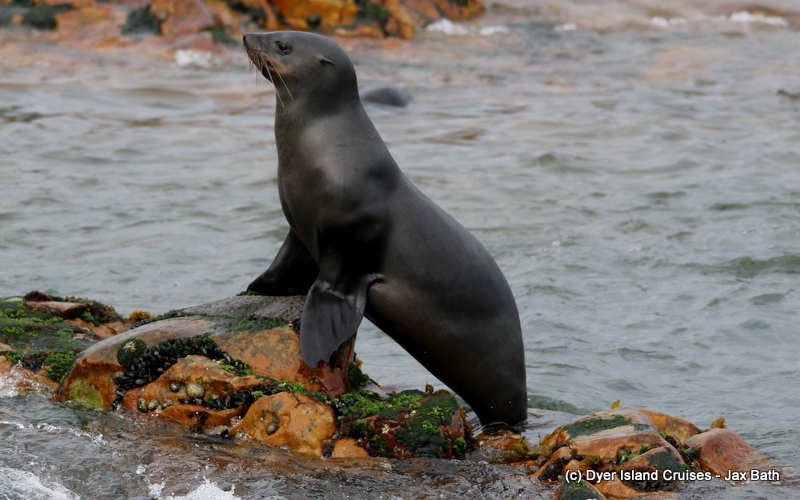 With a local population of 60,000, it's no wonder our guests capture so many photographs of these wonderfully playful marine mammals.

These inquisitive animals spend alot of their time on Geyser rock, but nonetheless they will often approach our boat during trips.
In both cases, we suggest a nice long lens and high shutter speed to ensure you capture these animals amazing character and personality.

Cape fur seals are “endemic” to Namibia and South Africa.  They are mammals, like us, which means they give live birth and feed their young with milk.  They eat mostly boney fish but do also eat squid, octopus, or crayfish if they find it.  Female seals and their young are present year-round and an adult female seal can weigh around 85kgs.  Fully grown male seals, or “bulls” can weigh upwards of 300kgs, so you can definitely see the difference in their size!  Bull seals are only present during the breeding season from October to December of every year. This is when male seals set up “harems” or territories of females to mate with.  A female will raise one pup per year, and it is estimated that Geyser Rock can produce 10-12,000 seals pups per year (but not all survive their first year).   Cape fur seals are famously the main prey for great white sharks.

Diet – Why would a seal eat a penguin?

More research needs to be done in order to understand the complex ecosystem surrounding Dyer Island. It is thought that small groups of “rogue” seals, typically young males, specialize in predating on seabirds. They do not consume the whole bird, but rather target the stomach cavity of returning birds. Returning birds are typically full of fish from foraging, so the seals are really after the fish meal inside destroying the bird in the process.

There is an especially delicate system at Dyer Island where penguin and seal colonies neighbor each other. Therefore, understanding the complexities of this system are imperative to the survival of the penguins.

Fun Fact: Females can weigh up to 85kg and males up to 300kg! This is because male seals must fight off competing males during mating season.