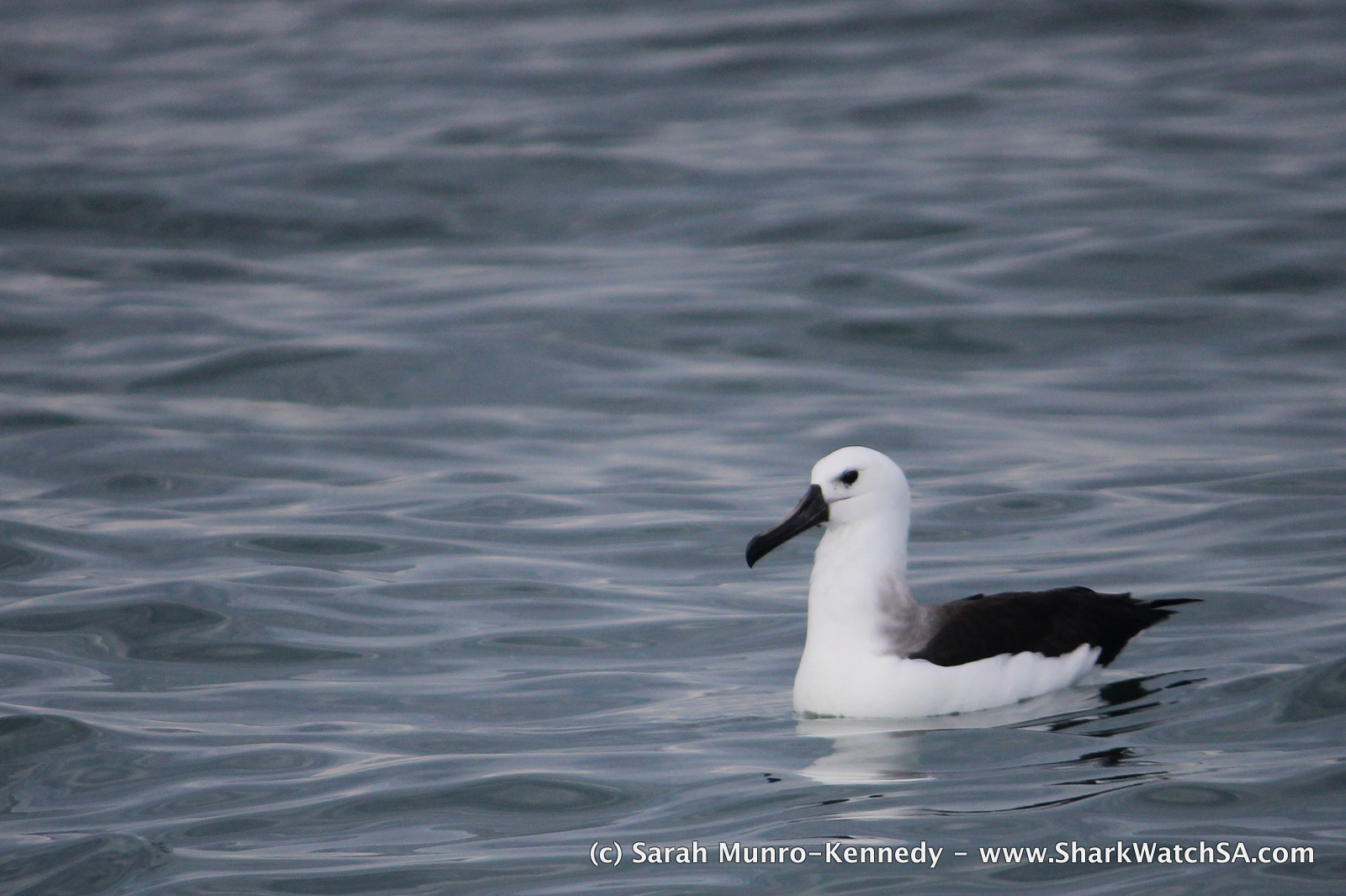 After a few days off the water, the Dyer Island system seemed to have transformed into a bird watcher’s paradise. On our first trip, as we moved through the shallows towards the shark cage diving vessel, our eyes were glued to the skies instead of the sea. A young Indian yellow nosed Albatross began circling our sister company. This bird seemed monstrous compared to the kelp and hartlaub’s gulls flying around. This species of albatross however is the smallest of the Mollymawk family, a group of medium sized albatross and can be identified by the yellow colouration running down the top of the bill. A very rare sighting indeed as the albatross species tends to live in more pelagic environments, only coming towards the coasts in certain winds. We stayed at the shark vessel looking for sharks for a while but instead, a short-tailed sting ray visited, these rays are not uncommon around are shark vessels, like the sharks they are also attracted to the scent of chum.

We then made our way towards the seas behind Dyer Island, unfortunately for us, we could not spot that elusive whale spout. On our way back to Dyer Island, we came across a very large group of Giant Petrels, the often hang around the mouth of Shark Alley feeding on the dead seal pups that wash up.  Among them was also a white-chinned petrel, these birds, like the giant petrels, breed on off shore islands south of the African continent and remain at sea all of their lives until returning to mate.

As always, we found our cape fur seal colony as happy as every at Geyser Rock. Today, the seals looked in full force as brown fur covered the rock. We stayed here for a while, but we soon moved around the island, out of shark alley and into Dyer Island. Here we spotted our smallest member of the Marine Big 5. We saw a single African penguin just on top of a rock. These birds have seen a rapid decline in their population in last 20 years by around 95%. At its lowest the population of birds on the island was around 900 breeding pairs and thanks to the DICT it is now just over 1000. The DICT has been working very hard to place penguin homes on the island for the birds as their homes have been destroyed around the coastline. After the guano harvesting ended in the early 1900’s the penguins had nowhere to house their chicks but on the bare rocks, leaving the susceptible to predators and to overheating. This was our last sighting of the first trip, and headed back to the harbour to change over clients.

Our second trip started off quite different to the first, we had to launch our vessel from Gansbaai harbour as the tide was too low to launch from Kleinbaai. Again, our first sighting was of some of bird species. We came across quite a few birds feeding at Danger Point, including; swift terns, cape cormorants, sooty shearwaters and even the beautiful Cape Gannets. Amongst all this commotion, a few African penguins were spotted. They were quite calm around the vessel allowing for a great view of the bird. We then moved behind the island and towards pearly beach in search of whales but unfortunately, as on the first trip we were unable to spot any spouts at all. Another quick stop at our seal colony and we made the short journey towards the shark cage diving vessel. Luckily, we were able to glimpse a large white shark launching itself towards the bait line. After an excellent view of the shark, we moved into the shallows for one last attempt at spotting our rare indian ocean humpback dolphins. Amazingly, our skipper spotted the dolphins just as we were about to move towards the harbour. The dolphins, alas, remained very close to shore and due to the conditions, we were unable to approach much closer. This sighting wrapped up an excellent trip and we made our way back to the harbour for the last time filled with great memories.