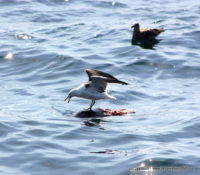 Over the last two days, we’ve had some great weather in the bay and it’s seems as though summer is showing its face just once more before we head into the colder winter months. It was beautiful this morning when we went to launch out of our tiny little harbour, and, luckily the conditions held up all throughout the trip before the wind picked up this afternoon.

Seasonal changes also affect our oceans and it is pretty common for us to have quite a bit of fish moving through the area at this time of year. This means that the ocean comes alive with both avian and water based predators, with the birds definitely being out and about today.

African Penguins were our first sighting of the day and we managed to see a couple of different rafts as we headed towards our sister company’s shark cage diving vessel. These guys will travel up to 60km in search of food but prefer not to traverse such large distances so it is always great to have some fish moving through the bay, making for a convenient meal.

Our stop in Jouberts Dam brought with it a Great White Shark. We definitely find that some sharks, particularly the smaller specimens, are more active around the boats than others and this guy gave us a great show.

Staying on the theme of White Sharks, we stumbled upon quite an interesting sight in Shark Alley, a famous hunting ground of these apex predators. On arrival in the alley, we spotted a couple of Kelp Gulls feeding on a Cape Fur Seal carcass. A closer inspection revealed that a possible shark bite might have been the cause of death. Although the seal was left intact, this is definitely indicative of the fact that the sharks are starting to hunt around the island again, which is great news for all who dream of witnessing one of nature’s most impressive sights, a predation.

Apart from this unfortunate little guy, the rest of the colony seem to be doing very well. There were many seals playing in the water just in front of the beach, all of which seemed completely unperturbed by the possible danger lurking below.

We made our way out the washing machine and towards Danger Point after this where some of us managed to catch sight of an incredibly shy Brydes Whale, who was a little late for a bait ball happening in Walker Bay. The birds were, however, plentiful with Cape Gannets, African Penguins, 2 Storm Petrels, 3 species of gull (the Kelp, Hartlaub’s and Sub Antarctic Skua).

We also had at least 4 White Chinned Petrels around which is always a beautiful sight. They hold the title for being the largest burrowing petrel. One can see them all year round in the area and they are famous for scavenging off of long liners.

We finished our trip the same way we started it, with some African Penguins. One of which started to bray in the water, reminding us of why they received their slightly rude previous common name, the Jackass Penguin.