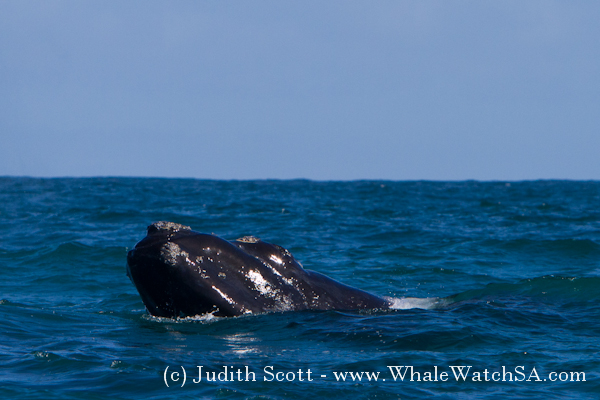 Once again we had calm seas and sunny skies today and we got out on the water for three trips to see the whales, sharks and seals.

Once again too, we were rewarded with sightings on all three trips of Southern Right whale Mums with calves. On all three trips we saw at least one pair. On the second tour of the day we saw a calf that was quite active, lifting its head out of the water a couple of times and rolling around. We also saw the mother whale do a couple of small spy hops. We also saw this pair on the last trip, and again the calf was rolling around a little. This is the most active calf we have seen so far this season. As the calves get older and bigger, they tend to become a little more active, learning all the behaviours they can perform as a whale!

We also got to see a Great White shark on every tour today when we visited our colleagues at Slashfin. On the first trip we saw quite a large shark and on the second a much smaller one, but it gave us a really close look.

As ever, our visits to Geyser Rock were spectacular, with juvenile Cape Fur Seals playing all around the boat, and thousands of seals sitting on the island. We also saw African Penguins on all three trips, although they were all quite difficult sightings. On the first tour one was seen on Dyer Island itself, but at a distance, and on tours two and three we saw groups of them in the water.