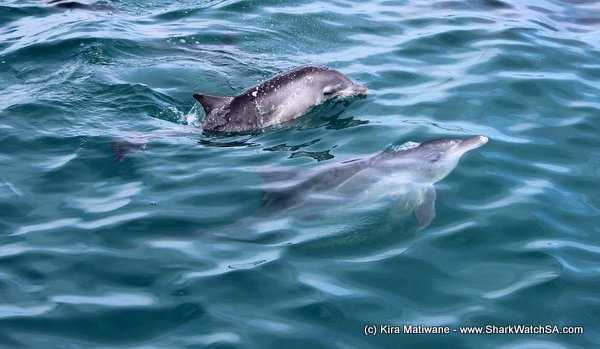 This morning, underneath beautifully clouded skies, the Whale Whisperer slid smoothly out of the harbour – unaware of the awesomeness to come! We had such lovely whale watching weather: calm water, a light breeze, pretty clouds painting the skies…it was the perfect day. Immediately after setting out, we encountered a pod of Bottlenose dolphins just outside the harbour! There were two adorable babies playing around in the water; they were too cute for words! After watching the dolphins, we cruised on over to the SlashFin, and saw a Great White shark leaping for the decoy in front of a cage of divers – a truly awesome sight to behold. We then headed on over to Pearly Beach, where we saw a beautiful mother Southern Right whale and her calf, as well as another Right whale nearby. Then all of a sudden, a Great White cruised passed the whales and the boat! An unusual sight for Pearly Beach. We then went over to another mother and calf pair, and witnessed a lone humpback dolphin swimming near them. Two different dolphin species in one trip! It was so cool! Kira then spotted another mother Right whale, a little further into sea, who was swimming with two calves, one of which has been abandoned. For the past few days the Whale Whisperer has encountered the abandoned calf with different mothers, who it seems are taking turns caring for it. It was an inspiring event to witness. Next we headed over to Shark Alley, where we saw many Cape Fur seals and cute little seal pups on Geyser Rock, as well as in the water. We then went closer to Dyer Island, where we were able to spot some African penguins (amongst many a seabird), after which, we called it an amazing day and headed home. We were so lucky to have witnessed the Marine Big Five, all within a few hours. Day = Made… – Dani Emdin (Marine Volunteer)