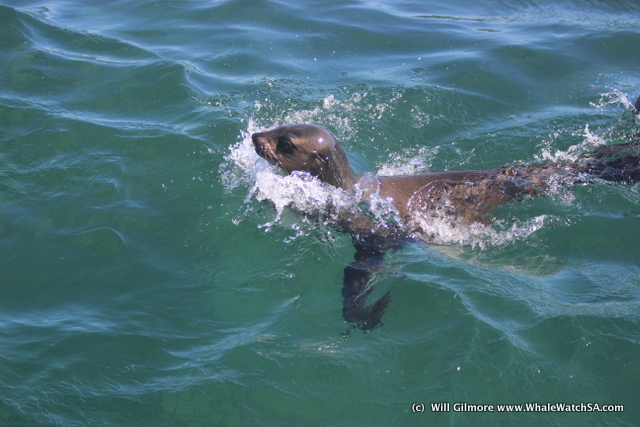 Once again, our first sighting of the day was our Indian Ocean Humpback Dolphins. One of the dolphins that was sighted yesterday was still around, however it was with a different individual known to us and her calf. Seeing a mother and calf is great testament to the conservation efforts around the country towards the protection this species. The dolphins remained very shallow in the surf zone and we were unable to approach any further. After a stop at our sister company at the shark cage diving site, we unfortunately had to move on as the sharks were scarce. As well as this the conditions were a little too against us when looking for whale spouts. We spent a considerable amount of time in deeper water looking for them, but instead were treated to some awesome pelagic birds such as the White-Chinned Petrel and the beautiful Cape Gannets.

Our seal colony, however, was in full force. 60,000 strong seals performing for us both on land and in the water. Many were even porpoising around the back of our vessel. The Cape Fur Seal, is a subspecies of Brown Fur Seal most commonly found on the South African coastline. However, they belong to a family of eared seals with thick fur and external ears. True Seals have internal ears and seem a lot less efficient on land. Fur Seals tend to live in colonies thousands strong, while many true seals will spend more time alone in the water, only coming to land to breed. Amongst our great colony, we spotted a lone African Penguin. These dapper little fellows are South Africa’s only endemic penguin species and number around 2000 individuals on Dyer Island. We have seen a decline of around 90% in the last twenty years alone, all due to human intervention. On our way out of shark alley, we spotted two rafts of penguins heading back to the island, this was truly special as we rarely get to see penguins both in and out of the water. A great conclusion to a great trip.