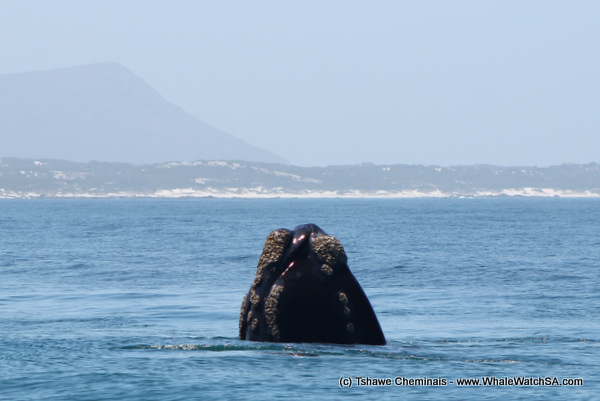 In our area, we’re not particularly well known for our visibility due our bay being so shallow that often, the sediment from the beach just kind of sticks in the water. However, over the last few days the “vis” has been out of this world and we’ve really been having a great time checking out the bottom of our bay.  The first thing one notices is just how many reefs we have in the area, that provide some shelter for a lot of our smaller species which brings some pretty amazing predators close to our beaches!

The very first sighting of the day was just in front of the Ulienkraalsmond estuary where we found a couple of African Penguins, who quickly disappeared on us. These little birds can swim up to 20km/h, which is impressive for an animal of only 60cm! Their disappearance was quickly forgotten when Kira spotted a dark shadow in the water. At this time of year, there’s a really high chance of it being a Great White so we went in for a closer look and sure enough, we had a juvenile White Shark around. This dude was travelling along the ocean floor, but with the water being only a few metres deep we got some perfect views of this misunderstood creature.  This shark was moving quite fast, which is not what we generally see when we find them in the breakers. White Sharks can reach a top speed of up to 50km/h but they cannot maintain this, so they’re usually only moving this fast in short bursts.

After spending some time with the Shark, we spotted a lovely raft of African Penguins in the water. These guys were not shy at all and we were able to move with them for a while, watching them swim under the water and having our cameras at the ready for when they all surfaced. The Penguins do tend to be a little more confident when there’s more of them around, with their being definite safety in numbers.

We found our very first whales after this, with a pair of Southern Rights moving through the bay. We watched these guys come up a few times before leaving them to continue with their travels. We also had a bit of travelling to do, as we decided to head towards Dyer Island. We took a slow pass by the front of the Island, where 9 of our Penguins from the African Penguin and Seabird Sanctuary were released today.  The seals were as cute and smelly as usual, and we passed them a few times to really take in the sight of Geyser Rock before we moved on towards Pearly Beach to try and spot a few more whales.

We definitely got more than we bargained for when we had some gorgeous sightings really close to shore. The whales were super playful today, with the adults also joining in on the fun. It all started off with a bit of spy hopping from one of the pairs, where mom and baby took turns having a look above the water’s surface. We then had some whales pass really close to the boat, with mom and baby coming up close and giving us an awesome view. At this point, another baby became a little more active and began to show off his tail, also rolling around a bit and giving us a view of his flippers. The Marine Big 5 was complete when we had a lone Bottlenose Dolphin pop up behind the whales, making for a great end to a great tour.