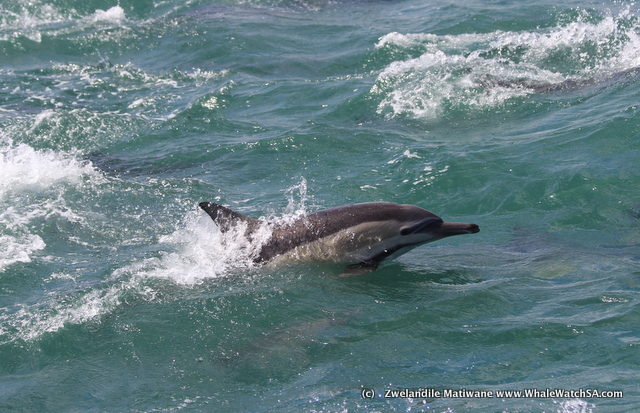 Our trip started off a little different today, instead of heading towards the shallows the crew spotted thousands of Cape Cormorants and other sea birds fishing near Danger Point. As we watched the cormorants we managed to sight the spout of Bryde’s Whale. We often call these whales “the Ferrari’s of the sea” as they move very quickly in all directions. Amazingly, the whale was very cooperative today and surfaced many times near the boat. The sightings of the animal started to become few and far between so we made our way towards Dyer Island. As we approached Dyer Island we spotted two African penguins sitting on the rocks, this was great to see as we rarely get to spot them on Island. After a stop at our 60,000-strong seal colony, we moved towards the shark cage diving vessel which was where the fun really started.

Our next sighting came in the form of pod containing around 100 common dolphins. This was only the second time this year we have seen the animals, and were pleasantly surprised when they started interacting with the boat. They began bow riding and breaching next to us, providing some excellent views of the animals, including some newborn calves. When the dolphins decided to get bored of us we continued on our journey until a mola mola, also known as a sunfish fish interrupted us. Mola Mola’s are generally seen when the water becomes slightly warmer as it brings in jellyfish that they feed on. This however wasn’t the last surprise. Just behind the shark vessel our skipper and crew spotted a Southern Right Whale breaching in front of the boat. This is only the third time this year a Right Whale has been seen this year as they are generally found from June through to December. We spent some time with the animal before we eventually moved on to the shark cage diving vessel. As we approached we got a fleeting glimpse of the tail and dorsal fin. Unfortunately, the shark did not surface for a better view, however this did complete the Marine Big 5!