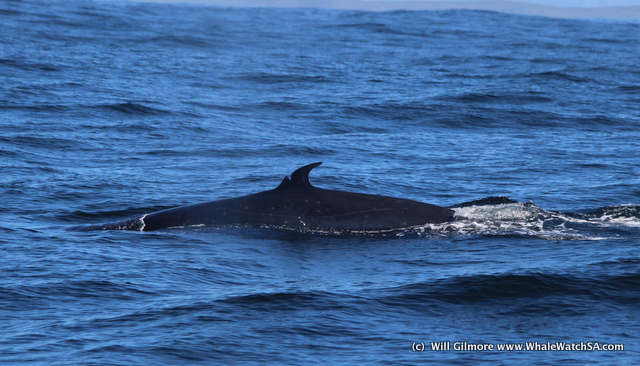 We had a whale of a time at sea today. Our first sighting came at our sister company, Marine Dynamics, where we spotted a large great white shark passing the boat. Once every had a glimpse of the shark, we moved on as to not interfere with their operation. Just before heading over De Clyde our spotter found some whale footprints on the water, these patches of clear water indicate that a whale may be just below the surface. The whale we found was Bryde’s Whale, our only resident whale. This one was very cooperative and allowed for some amazing views before moving towards the Island system. There were a few bird species we bumped into such as two very endangered African penguins and around thirty Giant petrels feeding on a few dead seals. We carried on through the shark alley for a quick stop at the seals and then on behind the island towards Danger Point. We managed to spot two more Bryde’s whales on our way back as well as another mother and calf pair. On our way back to the harbour we also saw an artic skua and a brown skua that followed us back to the harbour. 4 out the Marine Big 5 on the first trip.

After a quick change over of clients, we were back at sea cruising the shallows where we encountered our very playful Indian Ocean Humpback Dolphins. The four individuals were very exciting, one even full breached and the rest were lob tailing around the vessel. A truly beautiful sighting.! A great start to the second trip. We then moved behind the island once more in search of whales. We managed to spot another very cooperative Bryde’s Whale, again surfacing many times at the vessel. While waiting for the whale, we saw many pelagic bird species, including Giant Petrels, White Chin Petrels, Sooty Shearwaters and even a Corey’s Shearwater. A quick stop at our seal colony and then back towards the shark cage diving vessel where we saw another great white shark! Then, to tick off the Marine Big 5, we found some little African Penguins on the way back to harbour. This was not our last sighting as another brown skua followed our vessel on the way home. A great day at sea and some excellent sightings on both trips.