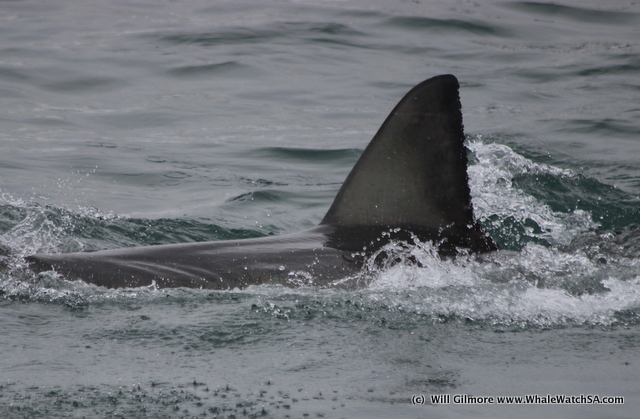 Our day began quite overcast, however it did not dampen ours and the animals’ spirits. The first sighting was of four Indian Ocean Humpback Dolphins, it was such a pleasure to see them again as they have eluded us for a few days. These play cetaceans kept quite a distance from us in the surf zone but they did put on a show, two breached out the back of a breaking wave. We decided to give the dolphins their space and moved on towards the shark cage diving vessels. A quick stop at our sister company and we managed to spot two white sharks. Amazingly, we saw the raw power of a white shark as it launched itself out the water and took the bait line right in front of us. After everyone on board catching a glimpse of this awesome predator, we set off behind Dyer Island towards Pearly beach in search of the largest member of the Marine Big 5.

Behind the Island looked a little lifeless, not much bird activity at all so we decided to stop and have a look around. Our eagle-eyed spotter, Kira, saw a spout off in the distance and we chased it down. All of a sudden one spout became, two, two then became three, three the four, four then five… We had over 8 whales, maybe even more, around us in all directions! We could not take our eyes off the water at all as they often would surface right in front of us, a very special occasion. As well as the whales, there were a few different pelagic bird species around us, such as the sooty shearwater, a Corey’s shearwater and even a few white-chinned petrels. A truly amazing experience.  We wished we could stay there all day, unfortunately we had to move on back towards the island. Just as we were approaching shark alley, a few giant petrels were sitting on the water and further beyond them a large raft of around ten penguins. We stopped at both sets of birds before heading through the alley to check out the seals and complete the Marine Big 5. The seals are truly amazing to watch and one curious little fella was playing with our YSI machine (records oxygen levels and temperature). With the Marine Big 5 complete, we headed back towards Kleinbaai Harbour. This was not to be our last sighting, however, we spotted two more rafts of penguins and our guides even spotted another Bryde’s Whale spout. An unbelievable day for both clients and crew.