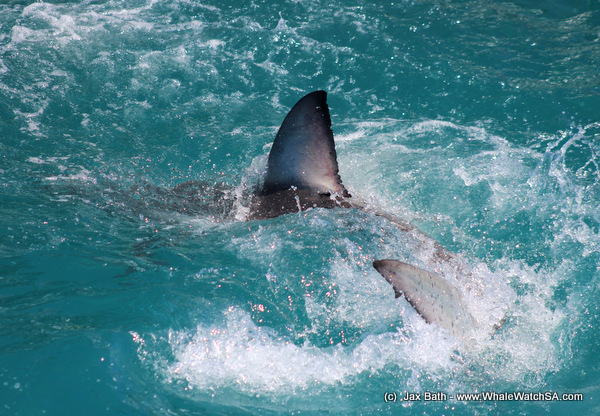 Today’s trip was a fun one with a bit of a swell pushing through on an otherwise beautiful day. The Colour of the ocean was spectacular as we are currently experiencing a colour front in the bay. This is when one has two different masses of water either converging or diverging, but basically what one sees is just a very stark contrast in colour between the water bodies. This was very evident in the shallows, the water was a milky cream soda colour close to shore which is caused by the presence of calcium or calcium carbonate in the water. If one looked just a little further out the water was a darker blue colour, representing the second body of water.

After appreciating the fine scenery along the coast, we stopped at our sister company, Marine Dynamics to see if we could spot a Great White Shark. They had just re anchored but, sure enough, after a little wait a juvenile Great White appeared from the depths. This shark was exceptionally active, going for both the bait and the decoy. In general, the smaller sharks tend to be more active due to the fact that their preferred prey are fish, so they have to do more chasing than the larger guys who lay in ambush for marine mammals such as seals. This was beautifully illustrated and we had a great time watching him before he disappeared.

Next, we cruised along the Clyde reef system where we picked up a piece of Sea Bamboo. Many of our younger clients were brave enough to sample it but the general consensus was that, although edible, it’s definitely not the tastiest snack in the world. We also managed to spot a raft of endangered African Penguins, which included a couple of juveniles, which we affectionately refer to as “Baby blues”. We watched them swim for a bit before carrying on to Dyer Island.

Following our stop at the island, we moved into Shark Alley where we spent as much time as we could with our favourite furry marine mammals. The little ones are becoming more and more confident by the day and keep approaching us with eyes bulging with curiosity. We also had a good look at the guys on hospital rock but where pleased to see that they all looked okay, somewhat disproving the old fishermen’s tale from which the rock gets its name.

After this we head behind the island and towards Danger Point where we spotted some more porpoising seals before heading back to the Harbour.