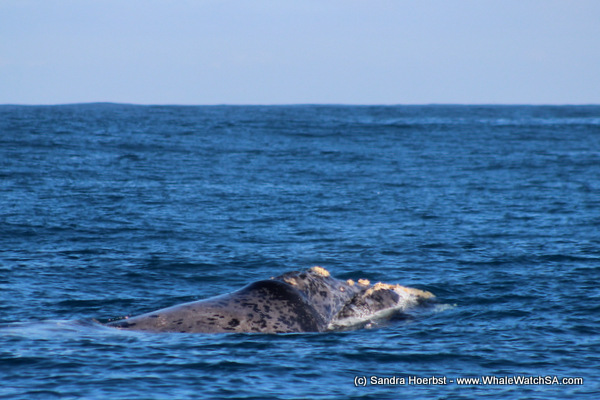 Today, we had luck on our side as we launched, with the skies opening to a crystal blue after a gloomy winter’s morning. The sea has also calmed beautifully, allowing us to gently hug the coast all the way to the infamous danger point, which is where we usually find our animals. However, today the action started long before this with us happening across a small bait ball showcasing a variety of our sea birds.

The first to be seen was none other than our endangered African Penguins. Initially, we saw only a couple who quickly disappeared, but as we approached, we came across a larger raft who decided to bless us with ample viewing opportunities before taking a dive. In addition to these little torpedoes in tuxedos, we also had a group of Cape Gannets, who are arguably the most stunning sea bird around with their golden heads and piercing blue eyes. Sooty Shearwaters could also be seen in large numbers with the occasional White Chinned Petrel gracing us with its presence.

Shortly after this, we had a Humpback Whale pop up a little further away, seemingly jealous of all the attention his avian friends were receiving. Although slightly sporadic in its movements, this majestic specimen was pretty relaxed, even coming a little closer much to the glee of all on board. A Shy Albatross also made an appearance, gliding with us as we moved with the whale.

After this we came across another small bait ball and another Humpback Whale, followed shortly by a Brydes Whale who decided to join in on the action. Brydes whales are a little smaller with an average size of about 14m (the Humpbacks are closer to the 15m mark) and a lot more shy. We got to see this resident come up twice before we decided to move on towards Dyer Island.

Shark Alley was a hub of activity with many of our resident Cape Fur Seals taking a dip in the icy cold Atlantic to escape the heat of the African sun. These playful pinnipeds provided us with much entertainment as they played the fool around the boat.

The harbour was our next port of call, with us returning to pick up our next group.

The second trip were really fortunate to be able to see a brindle Southern Right Whale. This stunning genetic variation only effects around 4% of the population with the little ones being born a shade of white. Interestingly, most brindle animals are males although it is also possible to have a brindle female Southern Right.

On this trip, we also had a great sighting of our Cape Cormorants who decided to flock to sea in their thousands which is always a spectacle to behold. The birds were taking a bath when we came across them, leaving us all speechless with the sounds of their wings beating in unison.

On our way back to the harbour, we also managed to spot a Humpback Whale and her Calf, which is always a special sight although we did not stay too long as we did not one to badger them too much.