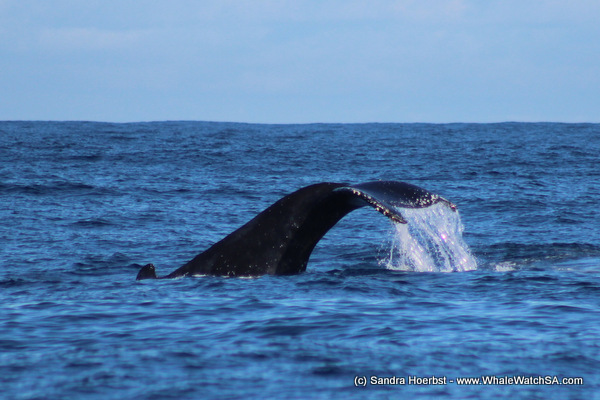 We had another sunny day out on the water with near perfect sea conditions, which set the tone for a beautiful Sunday afternoon cruise.

Today’s trip began with a few rafts of African Penguins which we found a little way off of Danger Point. These birds were cashing in on a small bait ball, and were joined by some Sooty Shearwaters as well as some Cape Cormorants. Bait balls occur when small schooling fish become closely packed together, usually due to being surrounded by predators. The birds then launch an aerial attack with the Sooty Shearwaters being able to dive to a whopping depth of around 60m.

It is always fascinating to watch birds at a bait ball and we were even able to hear the calls of some Swift Terns as well as the braying of the African Penguins, who were formally known as “Jackass” Penguins for this very reason. This is definitely not something we experience everyday so it made for quite a special moment.

After this, we moved on towards Dyer Island, taking the deep sea route in search of some Humpback Whales. On our trips, we often take a quick stop in order to try and do some spotting and we really hit the Jackpot today when Bee caught sight of a Humpback breaching. We moved towards this majestic animal and although it did not breach, we were not left disappointed.

The whale came up for us numerous times, approaching the boat on some occasions and even slapping its tail against the water after coming up right in front of us! This was a truly spectacular thing to see in close proximity as one really gets a sense of just how much power they yield. We also got to see his friendly giant lift his tail a couple of times. Every Humpback Whale’s tail has unique markings and this can be used to identify individuals, much like our finger prints.

During our time with the whale, we also came across a small fishing vessel which had managed to attract the attention of not 1 but 7 Albatrosses. This was an incredibly special thing for the crew to see as it is rare for us to find so many of these large, majestic birds together. Many of them were Shy Albatrosses, who breed on Sub Antarctic Islands off the coast of New Zealand.

Following this awesome sight, we took a stop by our resident Cape Fur Seal colony before making our way to Pearly Beach and then back to the harbour along the coast.

A: although the exact distance could not be calculated from South Africa to Antarctica it is roughly  7,362 kilometers away.