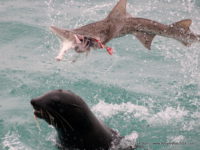 Today’s trip was a lovely one with the only real damper being the rain, which came over us in sheets. The sea conditions were perfect otherwise and we launched at 12:30, making it a bit of a later trip. The rain comes as part of a cold front, a common weather phenomenon that we experience in the cape where large frontal systems move over the land from areas further south.

Our first sighting of the day was hard to beat as we came across a Cape Fur Seal who had caught himself a large Spotted Gully Shark (Triakis megalopterus) otherwise known as a Sharptooth houndshark. These sharks tend to live in shallow waters and can reach a size of up to 2 metres, maturing at 1.3m. This shark was definitely a male due to the presence of claspers (the reproductive organs of male sharks stemming from their pelvic fins) and unfortunately for him, today he became lunch to a predator a little larger than himself.

He was, however, quite a large specimen so we watched in awe as the seal attempted to tear off bite sized chunks for himself. This was an incredible show as the shark was still relatively intact. After snapping a couple of cool photos, we moved on with our tour towards the islands. On the way, we spotted our resident Cape Cormorants on the beach and in the water by the thousands. It is not too often that we see them sitting on the mainland in our bay which was pretty exciting. This little Black Birds will, strangely enough, avoid flying over land, keeping to the sea when they move along our coastline.

Our stop at Geyser Rock, the smaller of the two islands, was especially exciting today as we had many seals playing in the water. Many of them were jumping out the water, exposing their entire bodies. This is incredibly tough to photograph although a couple of us on board tried our best. After this, we head into the deep sea where we spotted more cormorants before returning to the Great White House were the warm soup and gas heater where waiting to warm us up after a chilly time on the water.