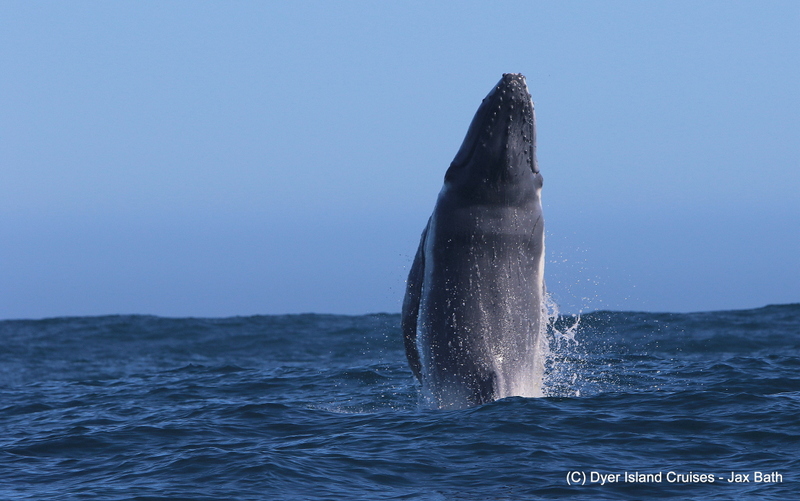 Today’s trip was a fantastic one, with a little Humpback Whale stealing the show just off Danger Point. After a few days off sea, we set out today from Gansbaai harbour and made our way around the point and into our bay in search of a whale or two. The swell was still rolling in, left over from the stormy weather that’s kept us landbound, so we had an adventurous ride out .

Whilst enjoying the surf, we spotted the spout of a single Humpback Whale who was slowly travelling along. We caught a couple of sights of this lone ranger before spotting some splashing a little closer to shore. We decided to go in for a closer look, to see what all the fuss was about.

In between the swell, we found a little Humpback Whale slapping its tail against the water, with mom by his side. We kept our distance, moving parallel to this very special pair to get a few views of this baby doing some practicing. After a while, he decided that he’d had enough lobtailing, so they began to travel along, surfacing together and displaying the strong bond between mother and calf.

Mom seemed relaxed, moving slowly along whilst keeping baby on the opposite side of her giant body. Baby seems to have already developed a curiosity for the world and the drive to see it, because it did not take too long for this little one to start breaching away! Often, when whales breach, they keep their eyes closed but in many of the photos you see below, baby has his eyes open. If whales want to check things out, they tend to spy hop to get a better view above the water, but I am fairly sure that this baby was also trying to figure things out whilst showing off and practicing his breaching.

We tend to find that the younger whales are very inquisitive by nature, inspecting objects that capture their attention in an attempt to better understand their underwater world. We could have watched this little guy all day, as he seemed just as enthralled by us as we were by him, but after getting such lovely views, we decided to let him and mom carry on with their travels.

After a spectacular time watching whales and catching some views of an African Penguin or two as well as a few Cape Fur Seals, we made our way back into Klienbaai Harbour after a once in a lifetime type of tour. 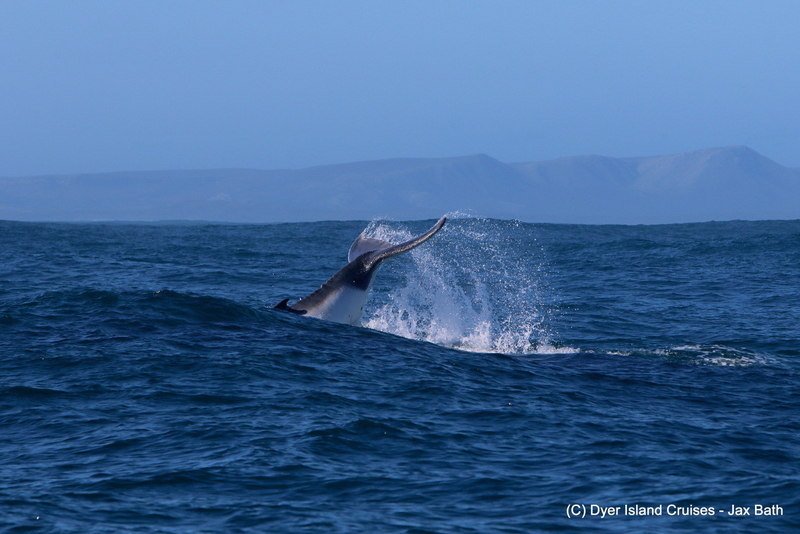 We started off with some lob tailing, which is when the whale slaps its tail against the water. 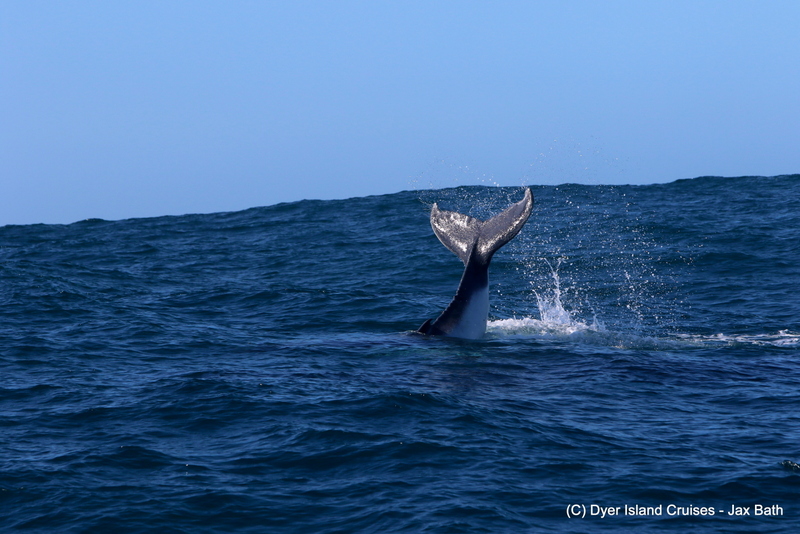 This is one of the skills mom will teach baby, which they will practice again and again. 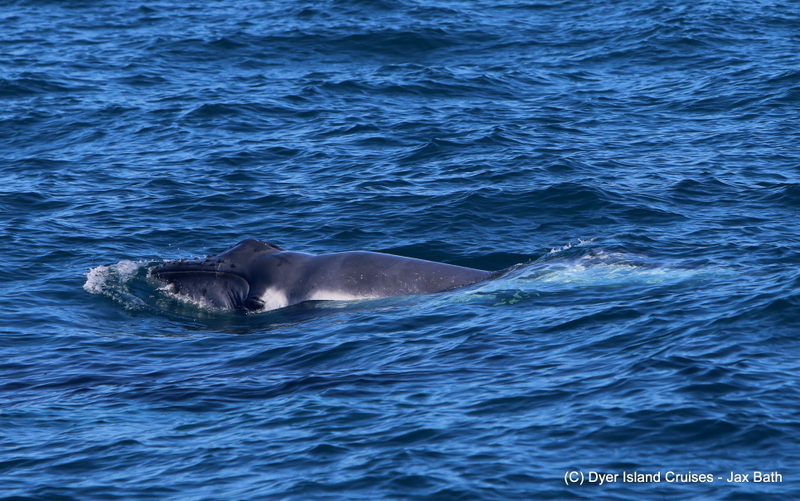 Can you spot the little ones eye? It’s closed, but we hardly get to see they eye when these whales surface, so this was pretty special. 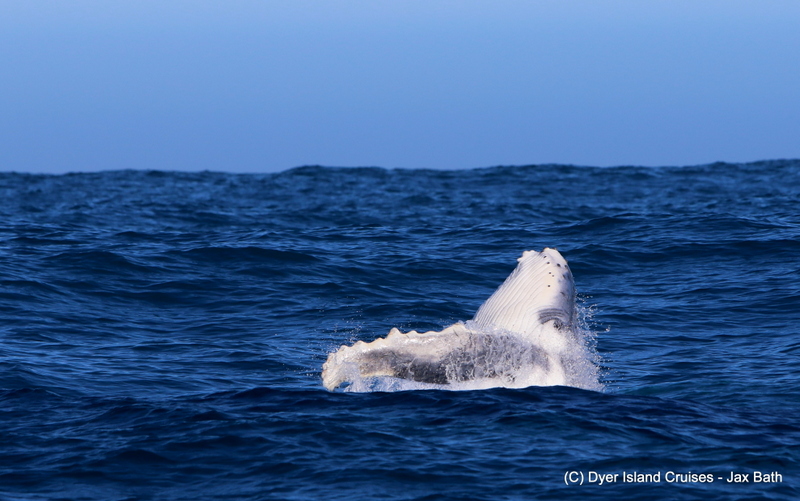 After travelling for a bit, baby got tired of the boring stuff and started to breach. 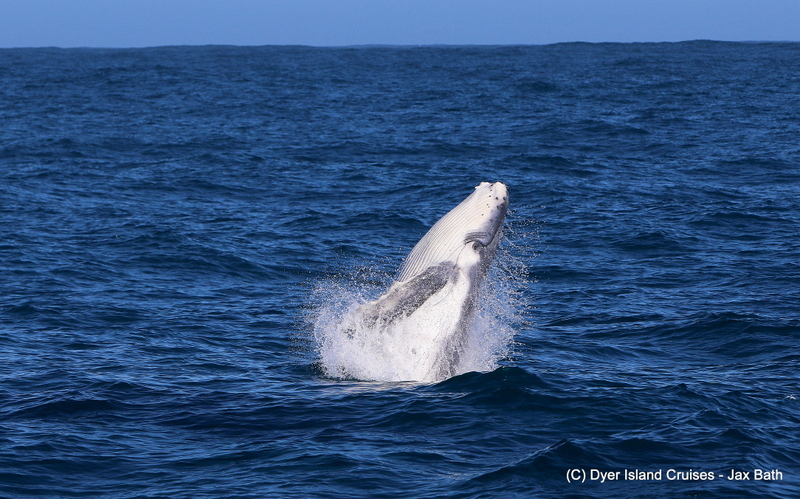 Have you ever in your life seen anything cuter? 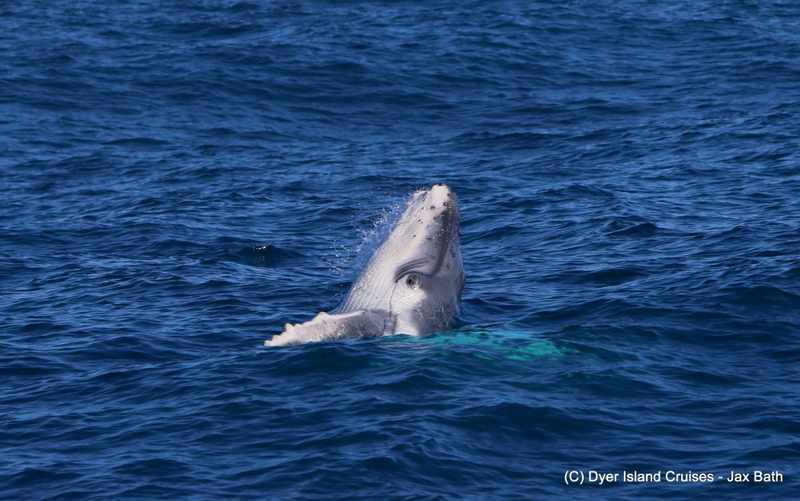 Little one has his eye on us. Typically, these whales have their eyes closed when they breach. 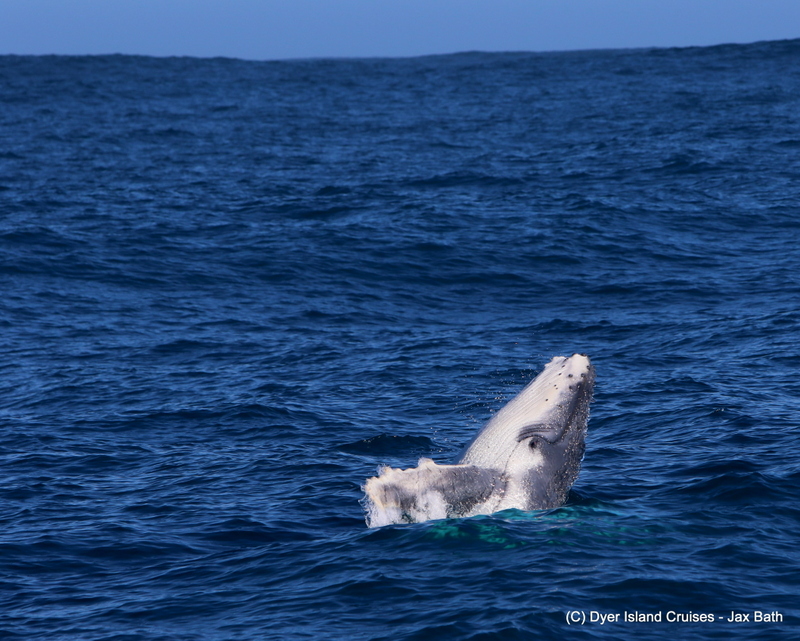 We could not get enough of this playful calf. When Humpback Whales are born, they’re typically lighter in colour, but as they age, the dorsal or top of the whale will darken to a grey-ish black. 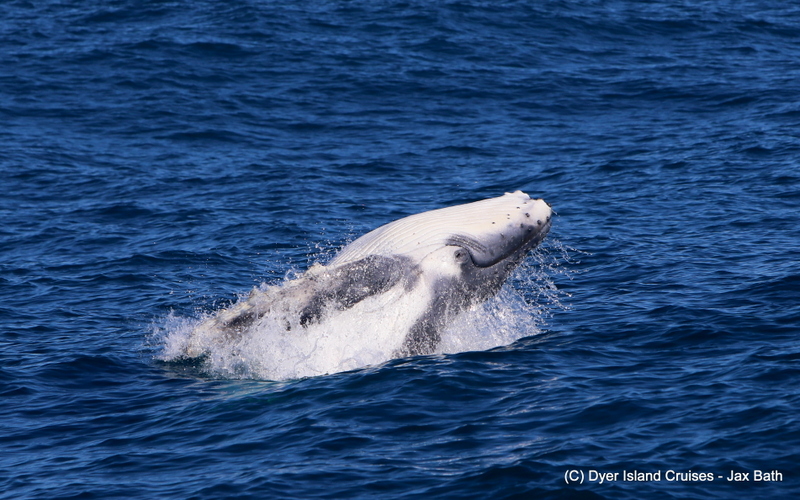 On the belly of these whales, you can see pleats. When this baby is big enough to feed alone, it will expand these pleats when taking in mouthfuls of krill rich water. The water will be expelled, but the krill will get stuck in the whales baleen.

A full breach from a baby whale. 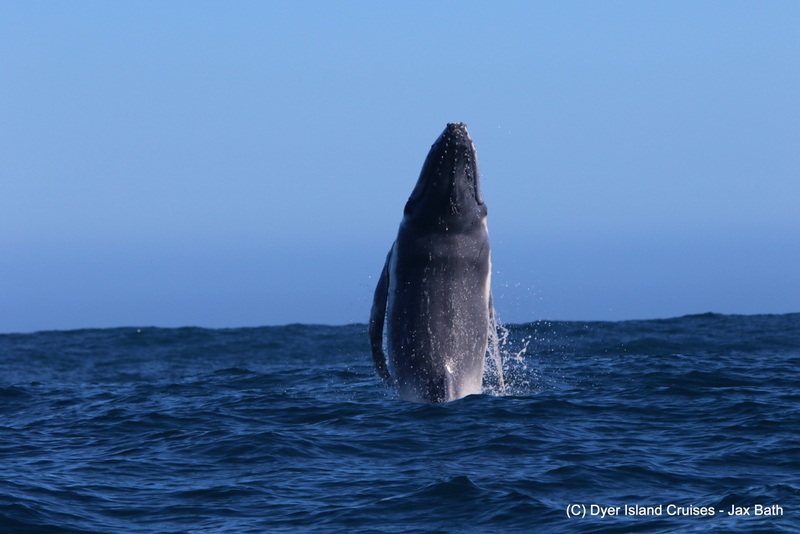 Breaching is another skill learned from mom. Watching the little ones practice is especially precious. 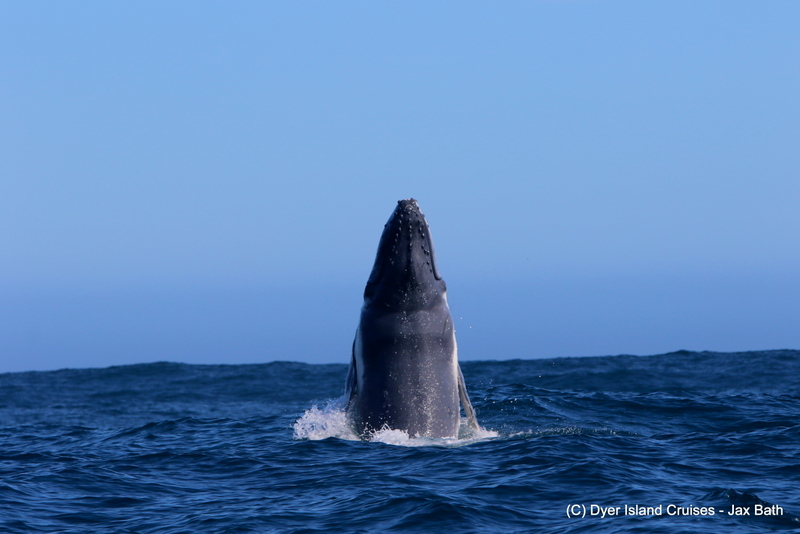 Whales are said to breach for numerous reasons, with fun, communication and parasite removal being some of the most common theories. 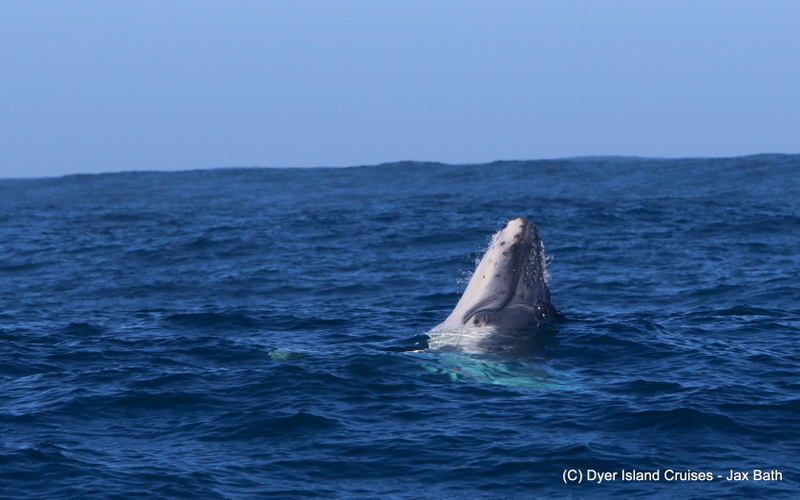 Look at the eye! 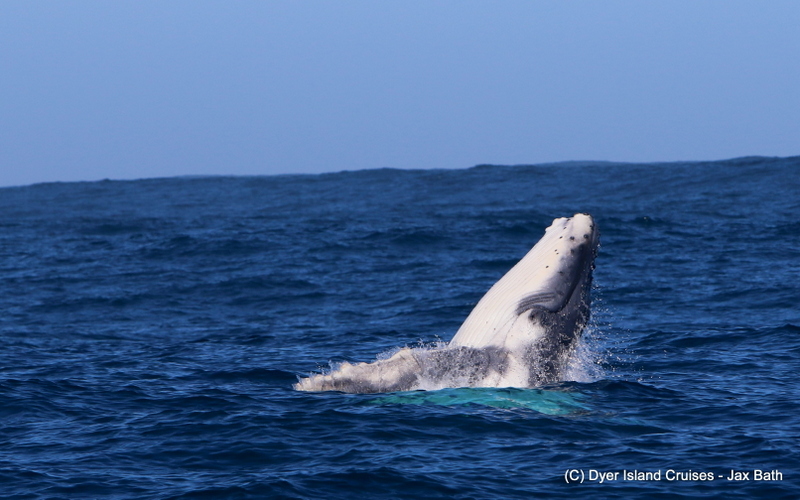 When baby is fully grown, those flippers could be up to 5m in length. 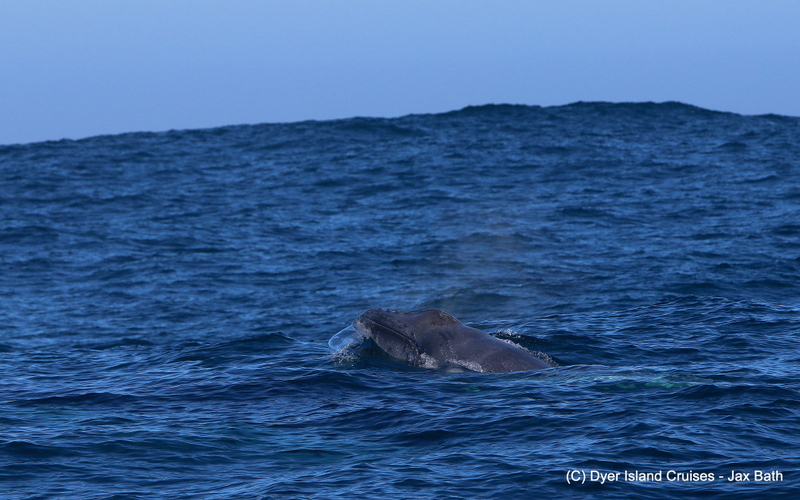 Baby taking a breath between breaches. 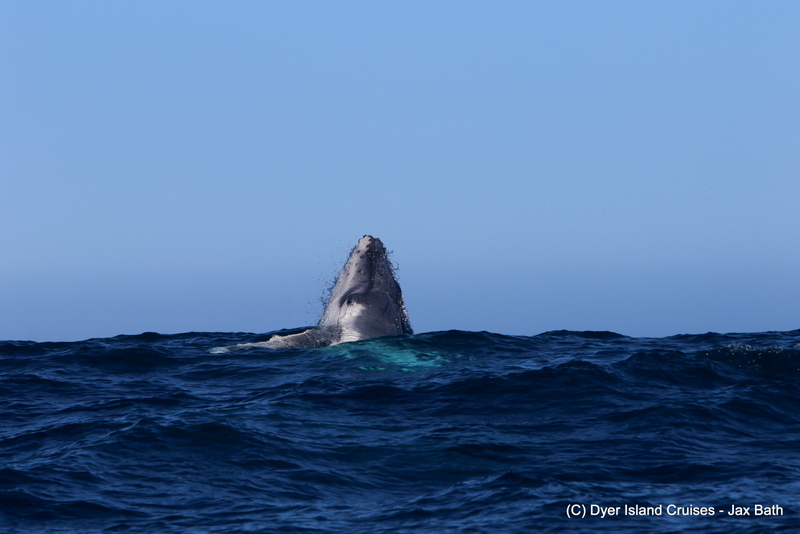 Breaking through the swell. 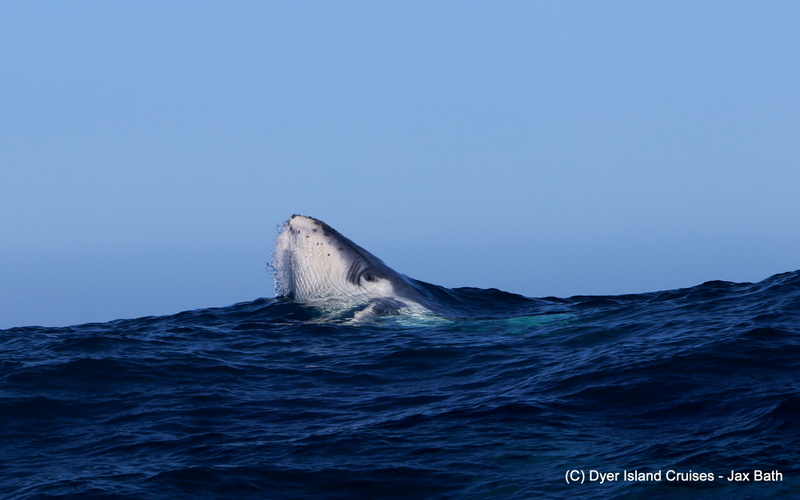 In this image, he’s not yet broken the surface of the water. 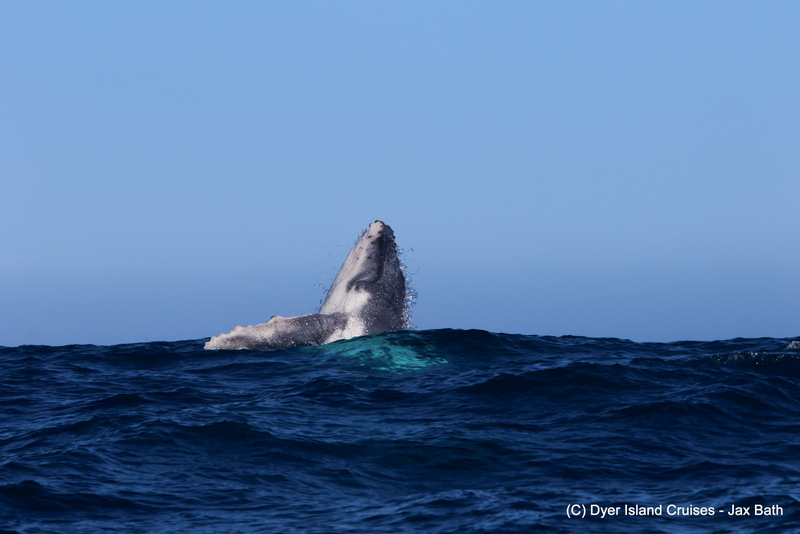 It was hard to tell who was having more fun, us or the whale. 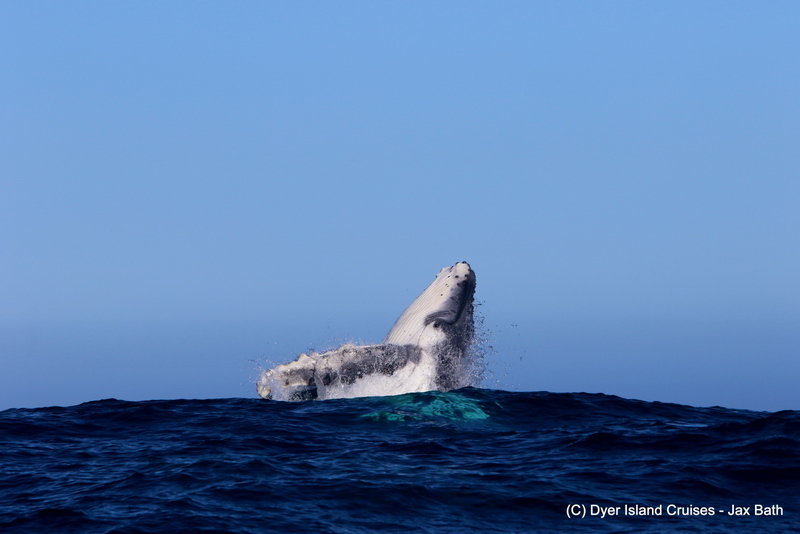 We often find whales love breaching through the back of the swell. 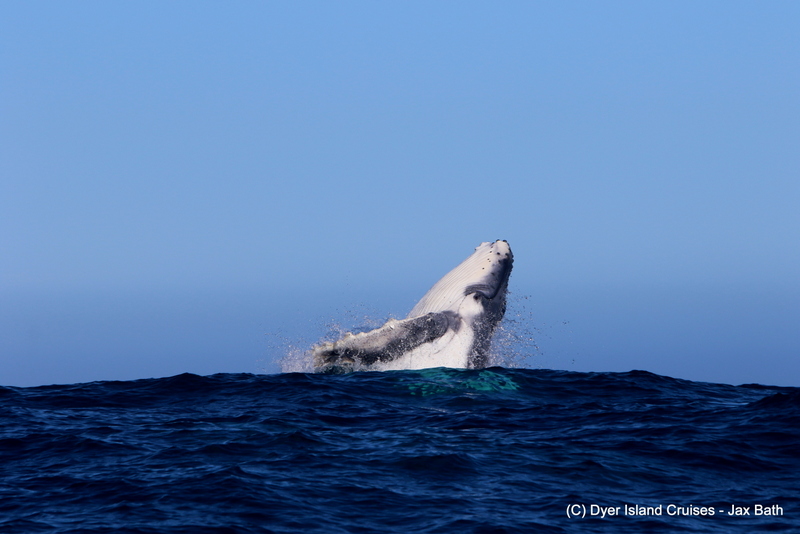 Fully grown, these whales can weigh up to 40 tons. 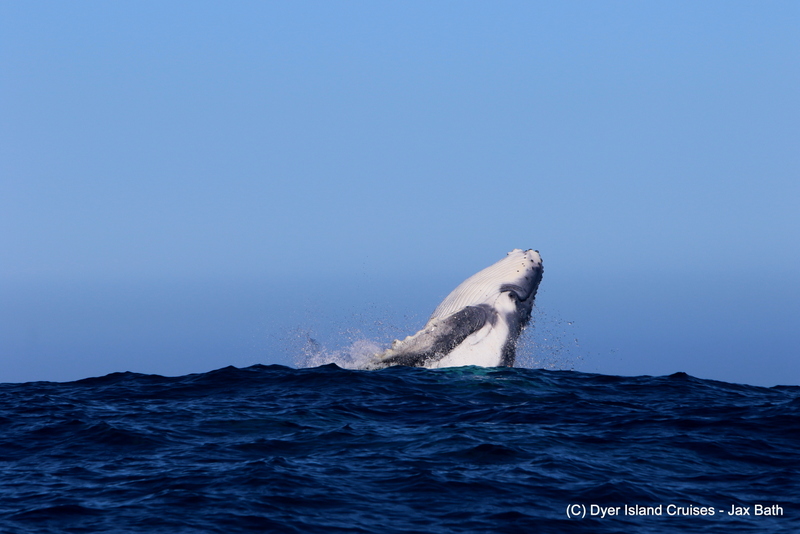 Humpback Whales also reach a size of up to 15m! 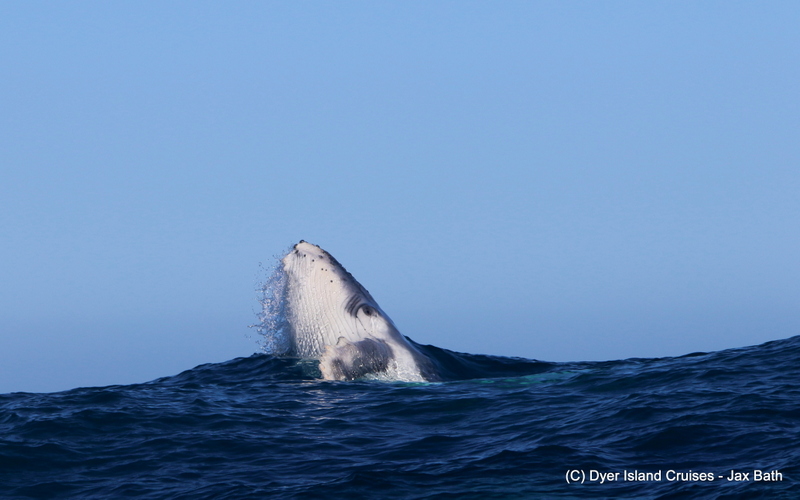 In the first few months of life, baby can grow up to 3cm a day due to moms fat rich milk. 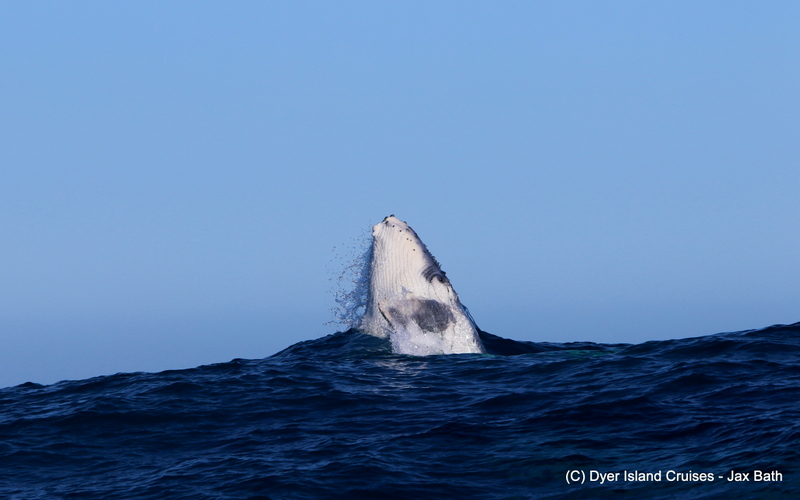 We believe that these little whales will spend up to a year with mom before going their separate ways. 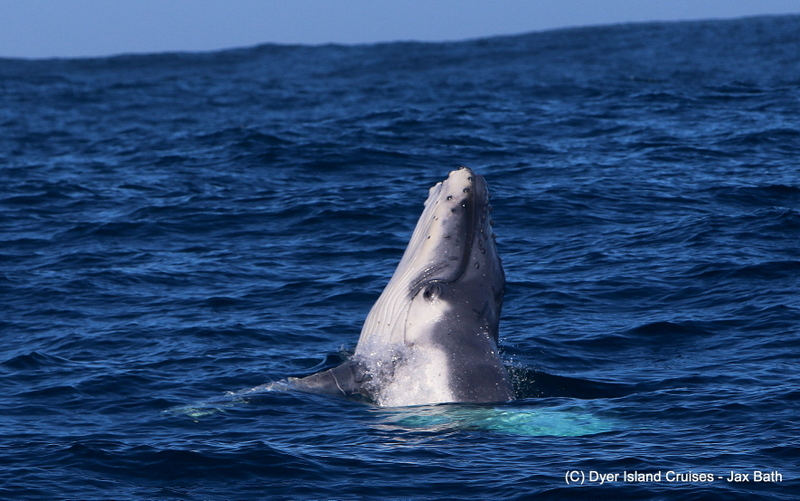 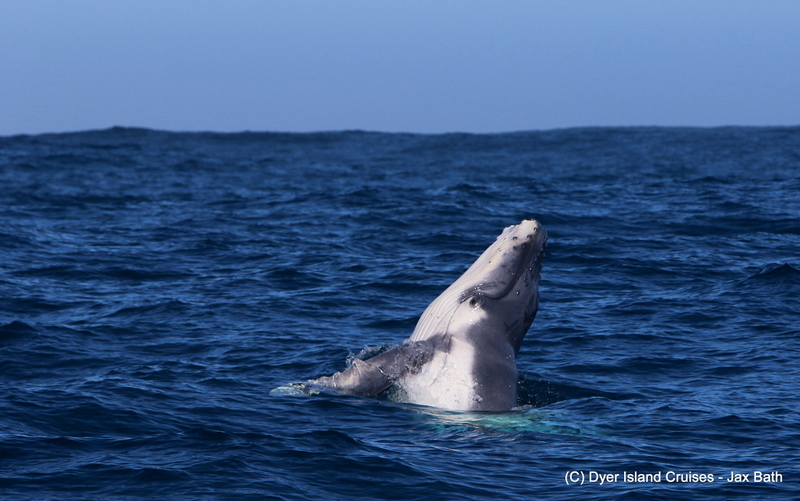 Like mom, this whale had a particularly white underside. 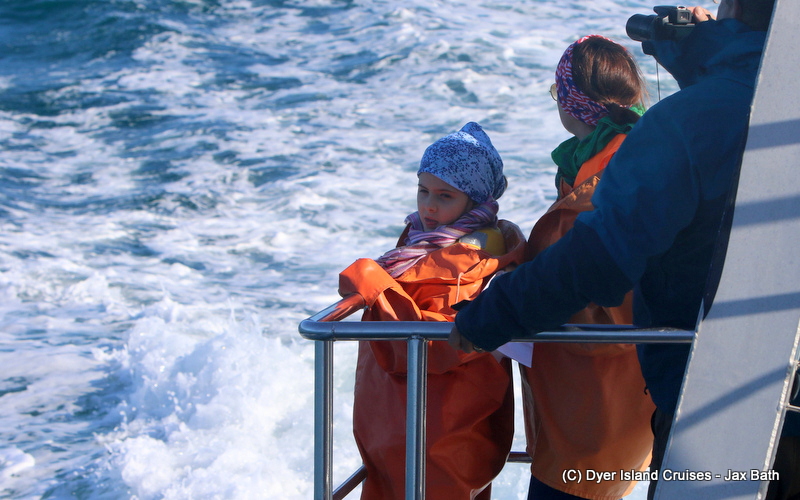 Paula enjoying her birthday with a whale watching tour! 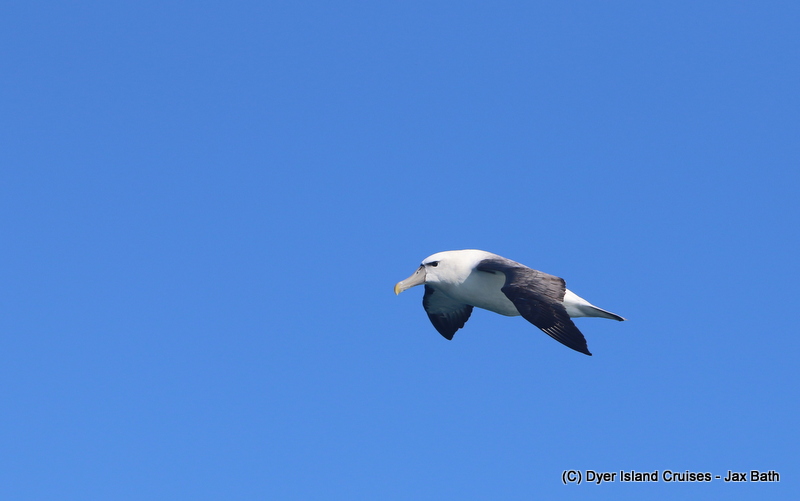 We had tons of Shy Albatross today, but we were a little too busy watching the baby Humpback Whale to photograph them all. 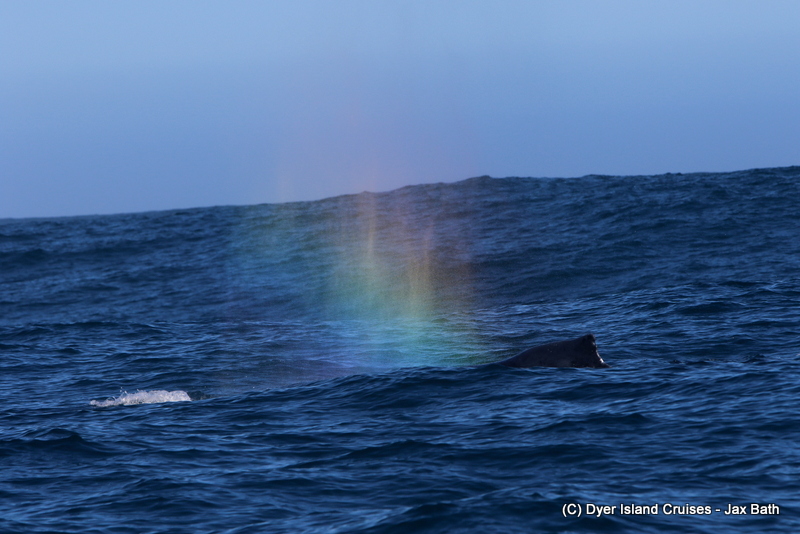 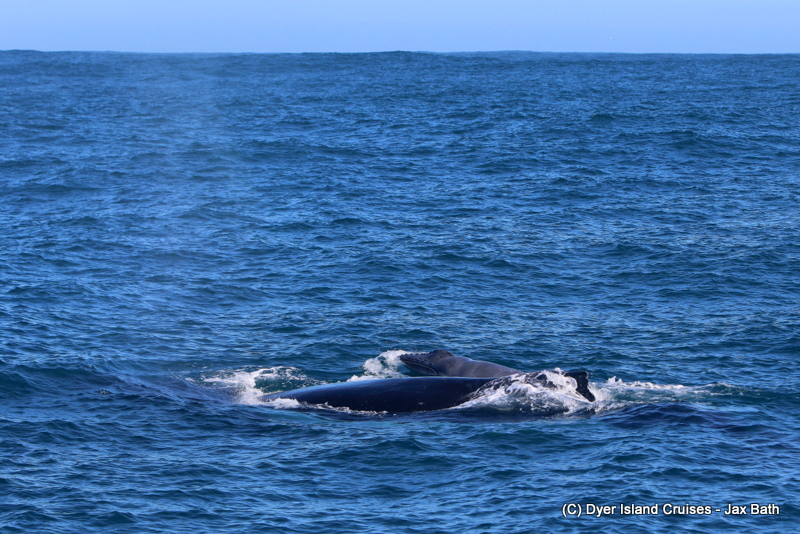