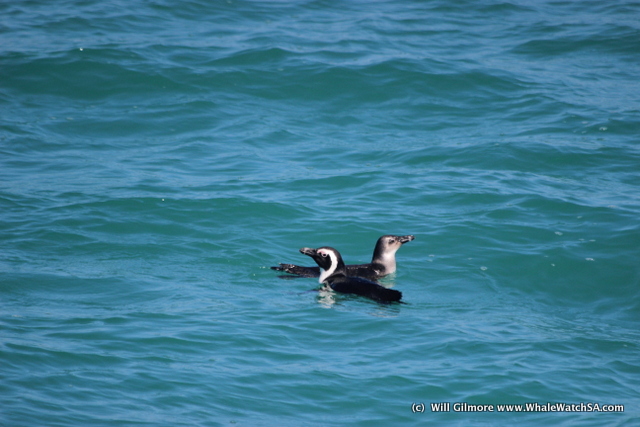 We could not have asked for a better day at sea, close to perfect conditions and all of the Marine Big 5 coming out to play. Our first sighting came just off Franskraal beach, a few swimming great white shark. This was an unbelievable sighting as we rarely get to see these awesome predators so close and relaxed. Almost as soon as we moved on from the shark, we were greeted by a small pod of Indian Ocean Humpback Dolphins. These generally shy cetaceans are our rarest dolphin and whale species in South Africa, with only an estimated 500 individuals left. Today, the dolphins we not shy one bit often coming very close to the vessel and even showing us their white underbellies. It always amazing to see these animals as we often go for days on end without seeing them. This is mainly due to their low numbers, as they are often caught in long lines, shark nets and other fishing gear. We soon moved on out behind the island in deeper water after the dolphins became disinterested in us. Behind Dyer Island, we generally look for the elusive Bryde’s Whale. These whales are one the hardest whales to watch due to their sporadic movements. Fortunately, we spotted a few spouts in the distance and quickly caught up with the whales. The one we decided to follow was very cooperative surfacing a couple of time in front of the vessel before taking a deeper dive. With three out the Marine Big 5 complete, we then headed back for Dyer Island and Geyser Rock to complete the checklist. Our playful cape fur seal colony is always amazing to watch both in and out of the water. The cape fur seal is actually a subspecies of the Brown Fur Seal which is also found in the cool waters on the South Coast of Australia. Fur Seals and Sea Lions are often confused for one another but are not the same species, however they are closely related that they form their own group at a family level.

After a quick stop at the seal colony, we headed towards sponge bay at Dyer Island for glimpse of an African Penguin. The African penguin is the only penguin that breeds on the African coast line and only number around 2000 individuals on Dyer Island itself. Despite their dwindling numbers, we were able to spot a few groups on Dyer Island, completing the Big 5.

On our second trip, we welcomed the Dyer Island Trust’s Deep Blue ambassadors to show them the wondrous and amazing wildlife on their doorstep. We quickly spotted three of our the Big 5 in the shallows, a pair of free swimming penguins, once more the Indian Ocean humpback dolphins and the jaw-some great white shark. A stop at Geyser Rock with our seal colony completed the second trip and all around awesome day at seal with some wonderful sightings.