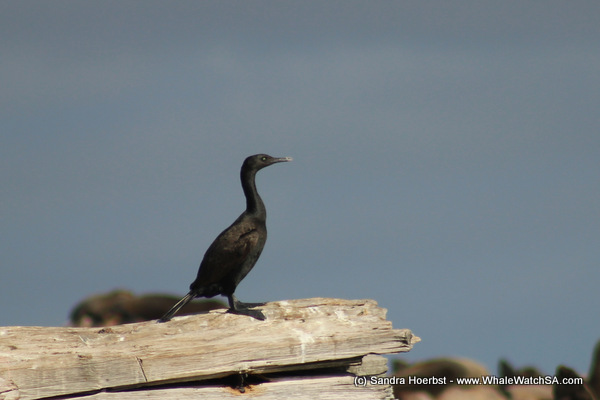 We had an absolutely amazing couple of trips today with some unforgettable sights. We’re not going to sea tomorrow due to a cold front moving over although, judging by today’s weather one would never say!

On our first trip, we launched from Gansbaai Harbour due to the spring tide we are experiencing. We hugged the rugged stretch of coastline from the harbour to Danger Point, spotting a couple of juvenile African Penguins along the way. Some lucky clients also managed to catch sight of the world’s largest bony fish, an Oceanic Sunfish or Mola Mola before it disappeared into the depths.

Once we had crossed over into our bay, we managed to find a Humpback Whale right around the 50m mark. This is where we often find these whales and we got a couple of good sights before this beautiful creature took a deep dive.

Next up, we came across an awesome natural phenomenon, a bait ball. Due to the crystal clear water, we were fortunate enough to be able to see the tightly condensed school of fish as some Swift Terns, Cape Gannets, Cape Cormorants, Sooty Shearwaters and even an African Penguin or two helped themselves to this oceanic feast. We watched enthralled as the birds had their way with this poor little school, who disappeared pretty soon after our arrival.

Our second trip launched from Kleinbaai harbour and we made our way towards Danger point, where the Birkenhead Rock could be seen breaking around 1km offshore. After this, we spotted something which could only really be described as breath taking.

A mother Humpback appeared with a teeny tiny calf in tow, which really made for the sighting of a lifetime. This minute beauty could be seen clearly through the water column, travelling just above its comparatively massive mom. These gentle giants are born at a size of around 4m and this little one could not have been much larger than that. We got to see them beautifully a couple of times before letting them carry on with their journey.

Later on, we caught up with some more Humpbacks who were so comfortable in our presence they even approached a bit. We got a lot of tail action with them taking a couple of deep dives and one even took the liberty of doing a tail slap before rolling onto its side, exposing one of its giant pectoral flippers, which can measure up to 1/3 of the body size of the individual.

We also got to see a Yellow Nosed Albatross along the way, both of the two sub species (the Atlantic and Indian) are considered to be endangered and so these birds never go unappreciated. After this, we found ourselves in Shark Alley were we spent some time with our Cape Fur Seals before taking a quick stop at Dyer Island and then heading back towards Kleinbaai.