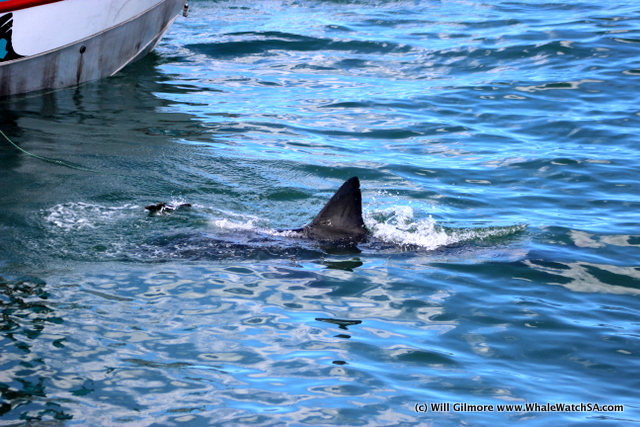 After a few days off the ocean we were treated to perfect weather and calm seas as we left Kleinbaai harbour in search of our Marine Big 5. The unique Dyer Island ecosystem is host to an abundance of life due to the clashing of the cool nutrient rich waters of the Benguela Current off the east coast and the warm waters of the Agulhas Current off the west coast. The mixing of these currents coupled with an estuary running into our bay, can support a huge variety of species, all of which we spotted today on our marine safari.

As soon as we left the harbour, we were in pursuit of a whale spout, heading to the middle of the bay to catch a glimpse of the largest member of the Big 5. As we arrived at the spout sightings we came across a bait ball were many sea birds were fishing, such as terns, gulls and cormorants. There were at least two whales around and the one we followed was extremely cooperative with our vessel, surfacing at one point just meters from the front. We hung around this animal for quite a while as he provided us with some fascinating views. This Whale is known as a Bryde’s Whale, they can grow up to around 14 meters long and weigh up to 40 tons. The whale gets its name from a man from Norway in the 1800’s known as Johan Bryde, who came to the country to set up the first modern whaling stations. This enormous animal is most known for following fish up and down the South African coast and is our only resident whale.

To our amazement, four African Penguins we also sighted near the whale spouts. The African Penguins on Dyer Island have a somewhat sad story to tell. The population has dropped drastically since the first settlers first came to the area. In the 1920’s there was an estimated 1,00,000 breeding pairs, now around just 900 left on Dyer Island. This was due to Guano scrapping on the Island which was used as plant fertiliser, this then left the birds without a home to raise their chicks. Without a home, eggs became vulnerable to collection by the locals and the chicks vulnerable to predation from sea birds. Although their numbers are dwindling, we still managed to get some excellent sightings. Nevertheless, not all hope is lost for our feathered friends, our dedicated team at the African Penguin and Sea Bird Sanctuary are working tirelessly with the Dyer Island Conservation Trust, to rehabilitate and release injured penguins and sea birds back into the ecosystem.

We then left for the world-famous shark alley to say G’day to our 60,000-strong Cape Fur Seal colony on Geyser Rock. The rock is around 3 hectares in size and managed by Cape Nature Conservation and Marine and Costal Management. The advantage of being on board Whale Whisperer was that we were able to get closer to the rock, giving the clients a more intimate experience with the seals.

Saying goodbye to our pinniped pals, we made our way to the shark cage diving vessel. We were in for a huge treat as a Great White Shark was very interested in the bait and made a few passes of the boat. This was extremely lucky as our Great White Sharks have been very scarce recently, we watched in awe for a few minutes before moving on as we did not want to interfere with their operation.

As we left the cage operation, we cruised the shallows in search of our elusive humpback dolphins. We managed to spot a lone dolphin just inside the surf but came to realise there was around five individuals including what seemed to be a small calf. The dolphins lived up to their reputation and remained cautious of the vessel. This Dolphin species is the rarest cetacean on the south African coasts numbering around 500 individuals left. However, due to an extensive data base of dorsal identification photographs built up by the Dyer Island Conservation Trust, we are able to aid in population studies of the Humpback Dolphins. Each dorsal fin is unique to an individual and by knowing which animals frequent these waters, we can estimate the number of dolphins in the area. We all managed to spot the animals, completing the Marine Big 5 and a glorious day on the water.