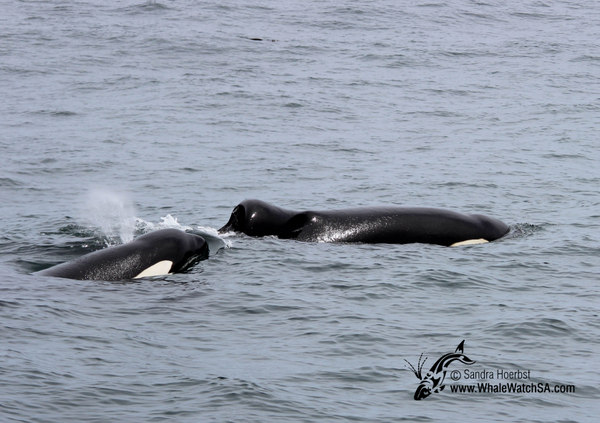 Its official our vessel, the Dream Catcher which we first launched a mere two months ago has proven to make dreams come true.

The 30th of October 2015 was a monumental memorable day, not only for our clients aboard our whale watching vessel but for many of our crew members as well.

Dyer Island Cruises second whale watching trip launched from Kleinbaai harbour at 13h30. Many of the clients on board the boat’s only hope was to spot the Southern Right whales, which are found along the Overberg coast line during June and December annually, but they were in for an amazing surprise from Mother Nature herself.

Our trips include a visit to Geyser rock, where thousands of Cape fur seals can be seen. It was on our way to the island when our wildlife spotter, Kira spotted an Orca. “I was amazed, I couldn’t get any words out, so all I could do was scream”, said Kira. The Dyer Island Cruises crew first spotted killer whales back in 2012, and as they still describe it to this day, it was a once in a life time experience! Watch the video here

Soon the crew released there were two killer whales; they were slow moving and sporadic, staying under for as long as five minutes and up to one minute above water.

On Saturday, 31st October 2015, these Orcas were spotted once on a whale watching trip on Dream Catcher again, close to the Island being much more active then when they were first spotted. The rest of the crew back on land immediately rushed down to the harbor launched the Whale Whisperer, hopeful we get to see the Orcas again and indeed we did. Their dorsal fins are bent, but we why… we do not know. Killer whales are the largest of the dolphins. The name Orca is comes from the name Orcus, a Roman god of the underworld who tortured evil-doers in the afterlife.

Food and feeding behavior
It has been reported that killer whales worldwide have accumulated an impressive list of prey which include seals, penguins, and whales and even sharks, which makes them top predators in our marine Eco-systems. There have been reports of seabird attacks, but these birds are not necessarily consumed, but “played” with in some cases. In essence a killer whale will and can eat anything, if it’s worth the size and effort.