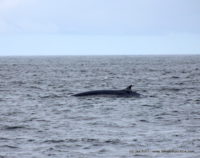 It was a busy day out at sea with two trips on Dream Catcher. It was absolutely amazing to witness just how much had changed in the sea in such a short space of time and it really reminded us of just how magical the ocean really is.

Walking down to the harbour on the first trip, we already had our first Brydes Whale blowing which was a great indication of what was to come. We spotted this whale on the boat only a little while later and managed to get some wonderful views of his back and what appears like a teeny tiny Dorsal fin (It can actually reach a height of around 45cm) before the whale moved off.

In the same area, we had a host of other species including the Cape Gannets, some Cape Fur Seals and a raft of our endangered African Penguins. The penguins were really relaxed and began to preen themselves in front of us, exposing their beautiful white chests and bellies. Preening is essential for all birds as it allows them to align their feathers and remove parasites.

After this, we cruised along the shallows, intercepting a mega flock of Cape Cormorants out on the hunt. We watched this spectacle for a couple of moments before stopping by Slashfin where we were able to catch a glimpse of the animal at the top of the Dyer Island food chain, the Great White Shark.

Their favourite food source was our next stop, so we made our way to Geyser Rock which was exceptionally packed today. After watching their tomfoolery unfold for a good 20 minutes, we head back to Kleinbaai Harbour to pick up our next clients.

By this time, the fish that had been in the area had moved off and so we made for the shallows straight away. Here, between the breakers, we found 3 of our Indian Ocean Humpback Dolphins. This species usually lives in small groups of up to 10 individuals and it appeared as though they were having the time of their lives, beating their tales against the water.

Following this, we found ourselves at Slashfin again were we had a very active juvenile White Shark around. This is fairly common as the juveniles are primarily fish feeders which means that they have to move quite fast to catch themselves a meal. Giving this cartilaginous fish a run for its money, next we spotted the world’s largest bony fish, the Mola Mola.

Unfortunately, he didn’t stick around for too long so we went on and found some African Penguins in the water just before Dyer Island before returning to Shark Alley. This time around, I managed to snap a couple of photos of the seal playing with kelp, which just goes to show that these sea dogs are just as playful as man’s best friend.

Our trip behind the island was graced with Cape Gannets, a Sub Antarctic Skua and the largest burrowing petrel out there, the stunning White-Chinned Petrel. Closer to mainland, we spent some time trying to behold not one but two separate Brydes Whales but, unfortunately, they remained a little elusive which meant that not everyone got the greatest view. However, these brief sightings resulted in a couple of lucky clients being able to tick of the Marine Big 5 off of their African Adventure.