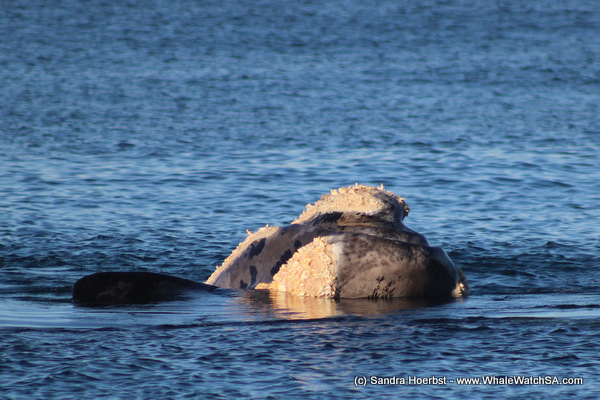 We had quite a few interesting and unusual sights on our trips today, ranging from awesome Southern Right Whale mating behaviour to the Predation of a Kelp Gull by two Sub Antarctic Skuas.

On our first trip of the day, we launched from Gansbaai Harbour and made our way around Danger Point before heading for Dyer Island. On the way, we spotted one of our resident Brydes Whales although the highlight of this stretch was definitely the appearance of a Shy albatross. This was a particularly special sighting due to the young birder who we had on board, t is always inspirational to see the glee in a child’s face when seeing something for the first time and today’s sighting was certainly no exception.

In terms of Whale sightings, Pearly Beach is definitely heating up and if things keep going the way that they’re going, it’s shaping up to be a great season. The area seems to be teeming with Southern Right Whales, with us being lucky enough to find mating groups on all 3 trips. Within these groups, we also managed to spot both a Brindle Whale and an individual with a white chin which are both genetic variations that you do not see every day.  We also had a lot of flipper action, from pectorals to tail flukes alike, the whales appeared to be having a blast as they rolled onto their backs and fooled around in the milky turquoise water.

In terms of other cool sightings, the second trip got to have a good look at an Oceanic Sunfish, otherwise known as a moonfish or Mola Mola. Although male Southern Rights may hold the title for the largest “anatomy” in the animal kingdom, the Sunfish hold the title for laying more eggs than any other vertebrate with numbers reaching a staggering 300 million eggs.

The last trip was lucky enough to see a Great White Shark but that was not the only predator action that they witnessed. Moments before we arrived, our sister company, Marine Dynamics, got to witness two Sub Antarctic Skuas taking down a juvenile Kelp Gull. By the time we arrived on the scene, one hungry Skua was already tucking in. This is something that we don’t see too often and so it was definitely a rather perplexing sight, especially when you consider the fact that the Skua is, in fact, a large Gull.

After a day of such rarities, we’re excited to see what tomorrow holds.