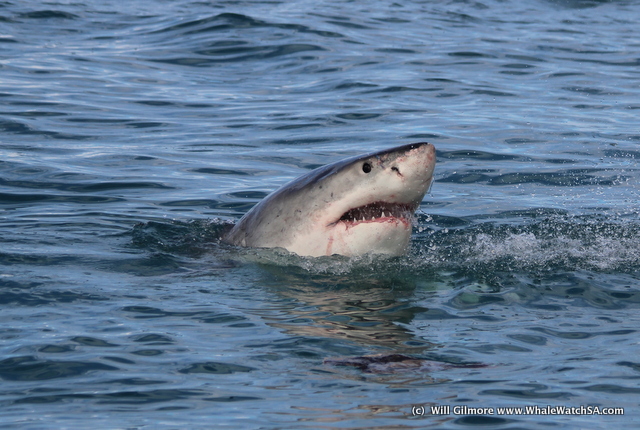 After a couple of days off the sea, we were all filled with excitement as the tour began. Our first sighting came as we entered the famous Shark Alley and were greeted by our 60,000 strong Cape Fur Seal Colony. The island was slightly busy today, many seals both in and out of the water. Often known as the “McDonald’s drive through” of the Ocean, Geyser Rock, where our seals reside is frequented by our larger great whites in the winter months, picking off the inexperienced pups learning how to swim. The males of the species are much larger than the females, and spend most of their lives in the open ocean hunting fish, only returning to the island to fight for a breeding group of females. It was also nice to see some of the smaller seals playing the pieces of kelp as though it was a dog’s chew toy, giving them the title of the “puppies of the seal”. There were also two very endangered bank cormorants making their nests on the Prince Port wreckage. As we left the Seals behind we headed towards Sponge Bay at Dyer Island to glimpse the smallest of the Marine Big 5.

As we pulled into Sponge Bay, it looked slightly empty of cormorants which made it much easier to spot a few African Penguins. Amazingly, around a few boulders there were around 10 individual’s birds. This was such a treat as we struggle to point out the penguins both in and out of the water. However, this is not due to their small size but to a dwindling population. In the last 200 years, humans have inadvertently destroyed penguin burrows in the guano by stripping it off the island to sell as fertiliser. As well as this, we took over 1 million eggs from colonies around South Africa as it was considered a delicacy. Unfortunately, humans also have a tendency to overfish certain areas including our own system, forcing the birds to travel over 60km a day in search of food.

We soon moved on from the penguins in search of the animals that draws thousands of people to our coasts every year, the great white shark.  We didn’t have to wait long as a large shark, launched itself out of the water at the bait line. Luckily, the bait handler was too quick for the shark pulling it out of the way giving us a great view of those famous teeth