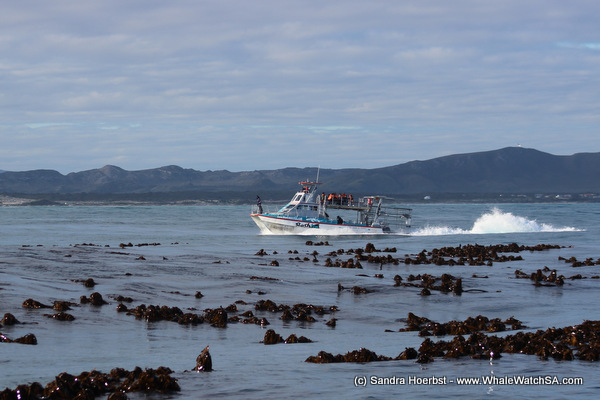 After 2 no sea days, we got straight back into it with 3 wonderful trips.  It is always exciting to venture back out after having been off the ocean for a bit, even if it was a little chilly due to the westerly wind we have blowing.

On our first trip, we head towards the shallows and hugged the shoreline all the way to the Clyde Reef System before crossing over into the next bay. Along this stretch of coast, one finds the quaint little town of Pearly Beach. This is the area where we do 80% of our Southern Right Whale Watching and we’re generally finding them quite close to shore.

Today was no exception as we came across 3 Southern Right Whales moving in the direction of Geyser Rock. Southern Right Whales form mating groups of up to 10 individuals, with many males gathering around a single female. It is always awesome to come across these groups as they tend to be a bit more playful than those who are still travelling.

On the latter two trips, we got to see a couple more mating groups, who were all really relaxed in our presence. We got to see some awesome behaviour, with the whales approaching us and rolling onto their backs. There were also a couple of curious adults who popped their heads out the water in an effort to get a better look.

These whales have Baleen Plates to filter their food. These plates consist of keratin and the bristles will be replaced after some time, much like the hair on our heads and the horns on rhinos. Baleen is sometimes referred to as “Whalebone” and can be carved, sometimes used instead of ivory due to it being a less expensive commodity.

In addition to the whales, we also got to see our resident Cape Fur Seals as well as a coupe rafts of African Penguins. Breeding season for these little guys is generally between March and May and the chicks are spending up to 4 months with their parents after being hatched. The eggs are incubated for 40 days which is almost double that of your domestic chicken.

We also to see an Albatross or two and all three trips ended with a Sub Antarctic Skua joining us for the last leg of our journey.