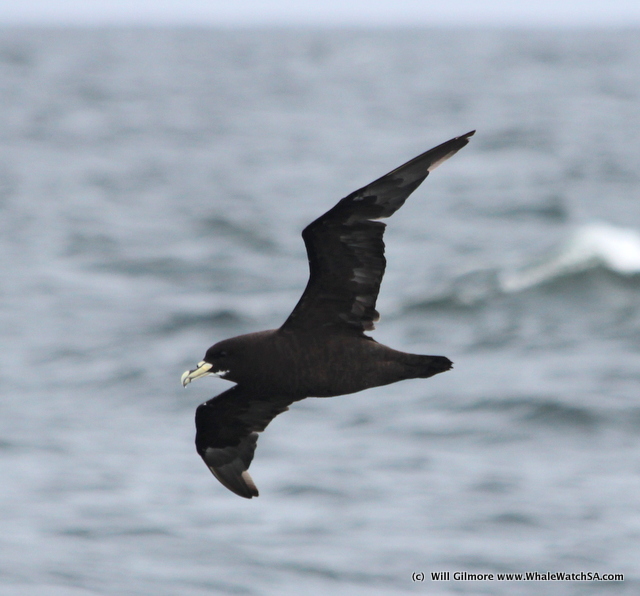 Today’s trip started very similar to yesterdays; awesome. After a little recon mission early this morning to find the huge pod of dolphins, we soon called back to land to quickly get our guests on board. The 300 hundred strong pods were just as entertaining as yesterday, breaching, tail slapping and back flipping as if to show off to us. The pod was filled with small calves, one even still displaying fetal folds from the womb indicating the dolphin must have been born no more than a week ago. The longer we stayed the more comfortable the dolphins became and few inquisitive individuals even began to bow ride. Again, we wished we could stay there all day but soon had to move on towards the shark cage diving vessel. The shark we encountered at the cage site seemed to be just as inquisitive as the dolphins. It was very interested in the bait and tried launching itself at the fish heads a few times but to no avail. Our journey continued behind the Island as we could not spend to long with the sharks. The ride was slightly up and down but we soon found a variety of pelagic birds feeding. Some of these birds included sooty and corey’s shearwaters, terns and many cape gannets and white chinned petrels. These birds are amazing to watch when feeding as the all have adapted different techniques to catch fish. A little while later we did come across the spout of a Bryde’s whale, unfortunately the whale seemed to take a deeper dive and did not surface for us again. We then made our way to our Island system to tick off the last two animals on our checklist. The cape fur seals on geyser rock number in the thousands, approximately 60,000 individuals from aerial surveys of the island. The seals are always fun to watch as the cause a commotion in and out of the water. After the light entertainment at the rock, we moved round into sponge bay at Dyer Island to glimpse the smallest member of our big 5, the very endangered African penguin. The island was slightly empty of cape cormorants today which made it a lot easier for us to spot the penguins. We saw two sitting on top of boulders that were soon joined by a third penguin. This completed our checklist but was not the last sighting of our tour. On the way back into the harbour, one of our guides and spotted found us two rafts of penguins. A very special occasion as we rarely seen the birds both on land and in the water on one trip. Amazingly, as we watched the penguins, a Bryde’s Whale surfaced very close to the boat taking everyone by surprise. The conditions slightly turned on us so we had to continue the journey back to the harbour where the dolphins met us again and seemed to say goodbye. What an incredible day at sea.