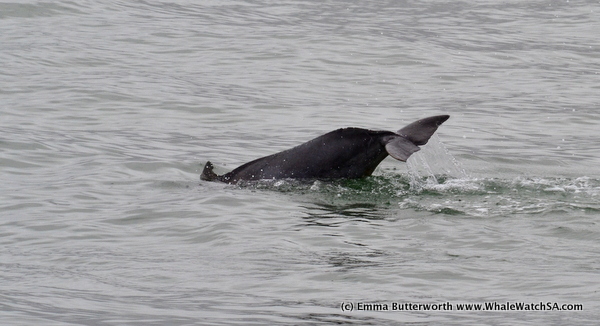 Once more on board our trusty Whale Watching Vessel, Dream Catcher, we set off on our sea safari which included every member of the Marine Big 5. Our journey began in The Shallows and we didn’t have to wait long before spotting our infamous Indian Ocean Humpback Dolphins. Generally, these animals are quite shy around large boats, but the small pod of three put on quite a show for us. One dolphin in particular, known to us as ‘Fingers’, was the star performer as we watched him lob-tailing and tail slapping. Everyone on board watch on in awe as this behaviour is rarely seen from this species. The Dyer Island Conservation Trust is working on an extensive database of dorsal identification to aid the protection of the Humpback Dolphins as there around only around 500 individuals remaining, making them South Africa’s rarest cetacean. From this database around 29 individuals are known to frequent our bay.

With some excellent sightings of the Dolphins, we moved on to our shark cage diving site in hopes of catching a glimpse of the most misunderstood creatures of the depths, sharks. It was a long wait at the cage site but it soon paid off as a nice sized Copper Shark passed the cage. We had to wait a while for the shark sighting, we moved on quickly after as not to disturb the cage diving operation. Copper Sharks can form schools of hundreds of individuals which is generally associated with the annual sardine run but can often be seen in smaller groups hunting fish close to shore. The species is highly sort after by fisherman for meat and fins and their oils can also be used in cosmetics. Copper shark population is highly vulnerable to population decline due its low reproduction and growth rates which can damage the overall health of an ecosystem.

We then headed on over De Clyde Reef into deeper water in search of the largest of our Marine Big 5, the Bryde’s Whale. However, on the way behind the island we stopped for a lone penguin floating at the surface, then two more as we continued. Our flightless friends were very comfortable around the boat today which provided some excellent views of the birds in their natural environment. In recent history Africa’s only endemic penguin has a sad story tell, firstly in the 1800’s Guano that stood over 4 meters tall was scraped off the island and used for fertiliser, leaving the birds homeless as they made nest within in Guano. This lead to further problems, the eggs were exposed to harsh sunlight often overheating and killing them. Kelp Gulls also fed on the eggs and newborn chicks decimating the population. Humans also had another role to play in removing eggs from the island as they were considered a delicacy, removing 1,000,000 eggs in one season. Over fishing of the area has left these birds starving and foraging further and further out to sea for food. All these factors combined has caused a 90% drop in the population leaving us today with only 900 breeding pairs on the Island. However, not all hope is lost as the Dyer Island Trust has been placing artificial houses on the island for the birds and set up a Penguin and Sea Bird Sanctuary to aid injured and sick birds found in our ecosystem.

It took us a while to spot our first whale spout but we were in for a real treat today. We generally only see the Bryde’s Whale surfacing to breathe but one today seemed as though it was feeding by turning on its side and creating a lot of white-water. These generally shy and elusive creatures were named after a Norwegian man named Johan Bryde’s who first came to South Africa to set up the first modern whaling stations in the country. These whales are often found travelling alone and reach lengths of 14 meters and weigh up to 40 tones. Unlike most species of baleen whales, the Bryde’s Whale will often to move in irregular patterns both surfacing and often changing direction making their patterns unpredictable and unusual. However, this whale surfaced in regular patters making it easier for us to get some amazing views on the animal. With 4 out of the Marine Big 5 we journeyed to the Island to complete the checklist we moved on the Geyser Rock to say hello to our resident Cape Fur Seal Colony. Today our pinniped friends were as playful as ever, juveniles porpoising around the vessel while the adults and pups were causing a ruckus on the land. An amazing day at sea, completing the big 5 for the first time in a while. This was not to be our last sighting however as we spotted a Northern Giant Petrel in front of the island. This was a final sighting before heading back to the harbour filled with unforgettable memories from our trip.