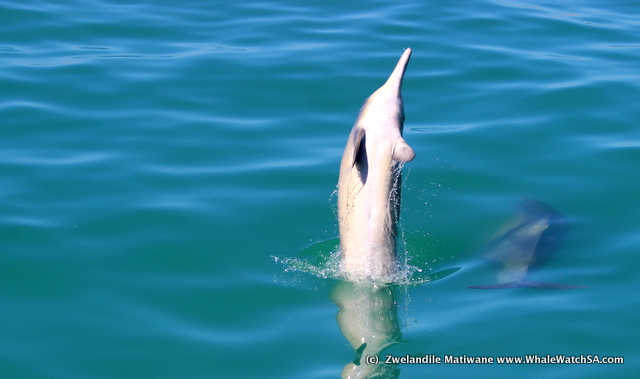 An amazing day at sea, filled with sightings that we all may never see again. The first of these came when we spotted a raft of over a hundred African Penguins. There are only around 2000 penguins that currently inhabit Dyer Island, so to see more than 5% of the population is indeed a special occasion. However, being exposed to the ignorance of mankind has taken its toll on the entire population of penguins in South Africa. Firstly, their homes were destroyed when the guano was hastily removed from the Island and used as fertiliser for gardens and crops. We then stole and consumed over one million eggs in a single breeding season further denting the population. If this wasn’t enough to damage their number, we then began to over fish the areas surrounding the Island, often forcing the birds to travel over 60km a day in search of a meal. However, this amazing sighting did offer us a glimpse into the past before the days of human intervention.

We then continued on our voyage towards the shallows in search of our most threatened dolphin species, the Indian Ocean Humpback Dolphin. Generally, quite shy around boats, the dolphins today were unbelievably entertaining. As we came across the animals, it became clear very quickly as they began a sort of acrobatic display in very close proximity to our vessel. One daring individual decided to show off and backflip just meters away from our awestruck guests. This dolphin set the tone for the others as they soon joined the fun. After a compelling performance, we said goodbye and moved on with our tour.

Once over De Clyde reef, we set off into the big blue in search of the largest member of the Marine Big 5, the Whale. We spent a considerable amount of time behind the Island scanning the horizon for any signs of the animal but were unable to spot a single spout. However, we were graced by a large number of beautiful Cape Gannets soaring overhead. It wasn’t until we had almost arrived back at the Island until we finally spotted a spout. A Bryde’s Whale. Like the dolphins, it also is relatively shy and elusive and like also like the dolphins, completely proved us wrong. This behemoth surfaced multiple times around the vessel, offering some amazing views of the head and blowholes as well as its dorsal fin. When the whale had decided it had enough of us, we moved towards the world-famous waters of shark alley to say hello to our always entertaining cape fur seal colony. The seals were our last sighting of the day before heading back to the harbour. Another extremely entertaining day at sea including 4 of the Marine Big 5!