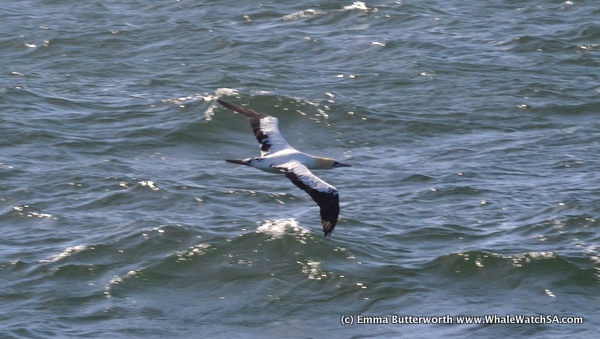 Although our larger marine creatures eluded us, today we watched the skies as the Dyer Island System transformed into a bird watcher’s paradise. Some afternoon sunshine greeted us in Kleinbaai Harbour as we departed on our first marine adventure for the day aboard our whale watching vessel Dream Catcher. It took us a while before our we managed our first sighting, six very dapper African Penguins. We found our feathered friends at De Clyde Reef, a reef system that stretches from the mainland to Dyer Island. When alone, the penguins can be quite skittish around large boats, however when in larger groups, they tend to feel more comfortable allowing for some excellent photograph opportunities. Once known as the Jackass Penguin, they are Africa’s only endemic penguin and mostly found in the cool rich waters off the east coast South Africa. There has been a population drop across the coast of 90% in only 20 years and are currently losing around 90 birds per week. This drop has been mainly due to humankind. The penguins would burrow into their own guano that grew 4 meters tall and lay their eggs and raised their chicks, however the substance made excellent fertiliser and was completely removed from the Island. Today, the birds must lay their eggs in open areas, leaving them exposed to the harsh African sun and predators such as Kelp Gulls. However, the Dyer Island Conservation Trust is working tirelessly with Cape Nature and the African Penguin and Sea Bird Sanctuary to rehabilitate and release sick and injured birds found in our system. Unbelievably, these birds were very cooperative today with both trips sighting a raft of six penguins.

On both trips, we managed to spot Northern Giant Petrels, a large scavenging sea bird that often frequents these waters. Giant Petrels are mostly seen alone, as seen on the first trip, but are also sometimes seen in groups often bought together by a food source. Amazingly, on the second trip eight were seen grouped together. Generally, these birds can be identified by their very dark plumage and the red tip to their bill. It is hard to distinguish from the Southern Giant Petrel at sea due to the physical similarities but at a closer look, the southern has lighter plumage and a green tip to the bill. Amongst the commotion, a White-Chinned Petrel was spotted. These birds are seldom seen in the area, it was a special treat for everyone on board including the crew.

However, the best sighting was saved until last. Just as we had taken in the petrel sightings, a beautiful Cape Gannet was seen gliding off the front of the boat. Gannets are easily recognisable by their silky black and white plumage, a golden head and a bright blue eye ring.  The bird was seen soaring very close to the vessel providing some amazing views of animal. Gannets are unique birds that can dive from 30 meters high and hit the water at speeds of up to 100 kilometres an hour to catch fish. They are perfectly streamline and have air sacks within a reinforced skull to protect them from impact. We also managed to spot a juvenile Cape Gannet just before the Petrels, they a morphologically similar to adults but display a brown plumage. The adult gannet was the last sighting and what a way to end the day.