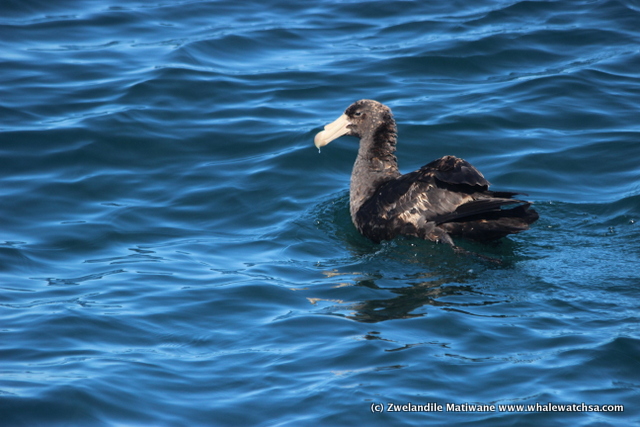 Our trip began today in almost perfect conditions, very little swell and wind. Our first sighting was yesterday’s last sighting, the Indian Ocean Humpback Dolphins. As with yesterday’s sighting, the dolphins remained just inside the breakers, making it unsafe to approach further. However, we were treated to some spectacular sights as they did come quite close at one stage. It is always fantastic to see these dolphins as we sometimes go weeks without seeing them. We did eventually move on with our tour towards the shark cage diving vessel. Luckily, within moments of arriving we were able to see a white shark launch at the bait, giving us a great view of those jawsome teeth. As we made our way behind the island the island in search of any spouts, we came across a cape fur seal chewing on a small stingray. The Cape Fur Seal has a very versatile diet, consisting of crustaceans, molluscs, fish species and even species of shark and stingray. We left the seal to his meal and continued in search of spouts but instead came across a lone African penguin. These birds can be quite skittish at the boat in small numbers but this individual was so relaxed around us. We continued to search but to no avail and continued the journey towards Dyer Island. Once in the world-famous waters of shark alley, we had no trouble finding our fur seal colony. The island seemed quite empty today of seals but were amazing to watch nonetheless. At the mouth of the alley when we departed, there was a group of giant petrels floating on the water. These birds are one of our largest sea birds and are often seen in the alley feeding on seal carcasses. We then entered Dyer Island to point out a few penguins, but unfortunately, the penguins we did spot were very far off. Luckily, we did manage to spot another penguin on the other side of dyer island, which was our last sighting before heading into the harbour.