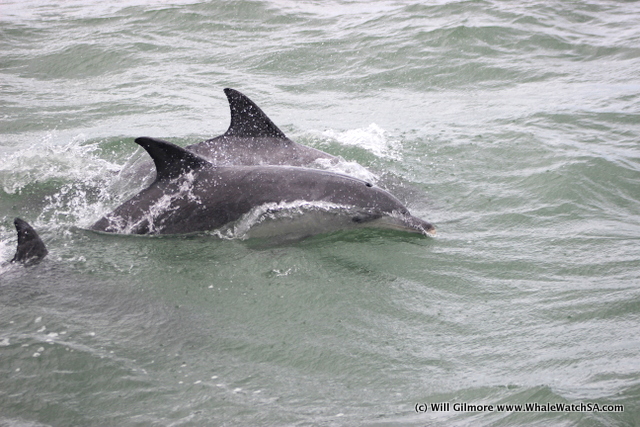 It seems as though we have entered dolphin season in the Dyer Island ecosystem, with all three species of dolphin (Indian Ocean Humpback, Common, and Bottlenose) being sighted in the last few days. Today we were in for a special treat, a pod of around 10 bottlenoses made their way towards us in The Shallows. This is one of the most playful species of dolphin and seem to be undeterred by large vessels making some great viewing opportunities. However, this can also be an issue for dolphins, their playful ness can cause injury through boat and propeller strikes. Everyone on board was awestruck by the dolphins as they certainly lived up to their reputation by playing and bow riding with the boat. We stayed with the dolphins for a while before moving on to our shark cage diving vessel.

Unfortunately, the sharks seemed to elude us today, but this was quickly forgotten as we moved over the De Clyde and spotted the spout of Bryde’s Whale next to Dyer Island. Bryde’s whales can reach a length of 14 meters and weigh over 40 tones, these massive creatures are South Africa’s only resident whale species, moving along the coast following fish. The body is sleek and dark-grey to mottled with a lighter underbelly and have a prominent and hooked dorsal fin. This amazing whale was very cooperative today surface very close to our vessel providing some excellent photograph opportunities. Usually these whales can be very hard to photograph as their movements are quite erratic and fast, often surfacing on all sides of the vessel.

As we moved on from the whale and into Shark Alley, it was clear from the numbers on Geyser Rock that majority of our adult seals were off fishing. Most seals that remained on the island were very close to shore or on the rock itself, these may be due to the presence of a white shark as they moved into the area this time of year to feed on the inexperienced pups.

Our pups were causing mischief, adults laying around and the juveniles arguing, which always makes for entertaining viewing.

With 3 out the Marin Big 5 complete, we headed back towards the harbour. However, our total soon rose to 4 as we spotted a tiny duo of African Penguins. However, on the way behind the island we stopped for a lone penguin floating at the surface, then two more as we continued. Our flightless friends were very comfortable around the boat today which provided some excellent views of the birds in their natural environment. It has not all be smooth sailing for the African Penguin recently. Firstly, in the 1800’s Guano that stood over 4 meters tall was taken off the island and used for garden fertiliser, leaving the birds homeless as they made nest within in Guano. Due to the guano removal, the eggs were laid in the open, exposing them to harsh sunlight often overheating and killing them. Kelp Gulls and other predatory birds also fed on the eggs and newborn chicks. Humans also had another role to play in removing eggs from the island as they were considered a delicacy, removing 1,000,000 eggs in one season. However, not all hope is lost as the Dyer Island Trust has been placing artificial houses on the island for the birds and set up a Penguin and Sea Bird Sanctuary to aid injured and sick birds found in our ecosystem. We returned to the harbour after a great day on the water with some beautiful sightings of some of the wildlife that inhabits our oceans.