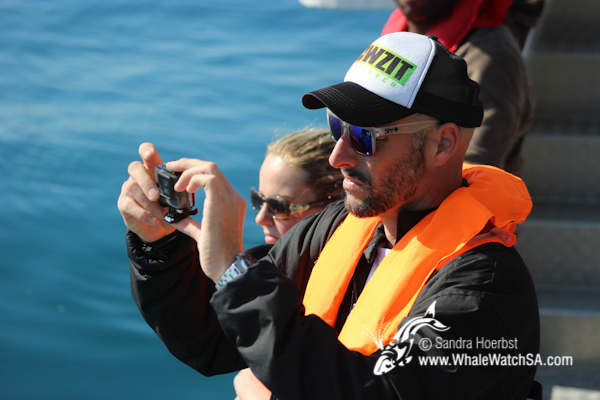 It’s really starting to feel like Whale Season here with our sightings picking up wonderfully. We had two lovely trips today with the first seeing all 3 species that the area has to offer.

The swell has dropped a bit from yesterday so we head out on flat seas and made our way towards the Uilenkraalsmond estuary. We had only been on the water for about 10 minutes before we happened upon two massive Southern Right Whales who we travelling parallel to shore.

These whales were incredibly relaxed and came up really close to the boat, which had many of us on board in a state of complete bliss. The whales were also in great condition with quite a fat, blubbery layer just behind the head. This is an indication of a very well fed animal which is always great to see as they can lose up to 1/3 of their body mass whilst in our waters, as they do not feed here.

After this awesome start, we made our way around the bay, going through Shark Alley to check out the Cape Fur Seals before heading on towards Danger Point where we spotted a couple of large African Penguin rafts at a bait ball.

We spotted a couple of Humpback Whales after this and managed to catch a glimpse of a tail before we spotted the spout of another whale. The next was an incredibly special sighting, a mother Brydes Whale and her new-born calf. Due to how shy this particular species of whale is, we do not know too much about their reproductive habits but we believe that the females are pregnant for around a year before giving birth to a calf that is around 3 or 4m in length.

The calf gave us a good show, shooting to the water’s surface a couple of times and exposing his tiny dorsal fin. We spotted this pair on the second trip but not before we came across 3 Southern Right Whales.

These whales also gave us some tail action and cruised with us for some time before we made our way towards Dyer Island. We had a couple of large bait balls around featuring Cape Gannets, Cape Cormorants, Swift Terns, Common Terns, Roseate Terns and some Sooty Shearwaters.

At one of the bait balls, we had something absolutely epic occur. One of our Shy Brydes Whales came up directly in front of the boat, lunge feeding on some small schooling fish who were passing through the area. The whale appeared from below just as we were looking above at a Cape Gannet about to take a plunge, the whale was so close one could see the pleats running along the bottom of the whales body.

This was our last whale for the day, and it certainly did not disappoint. Our last animal for the day was a large Sunfish who we found just in front of Pearly beach, these fish can weigh up to a tonne, making them the largest bony fish in the world.