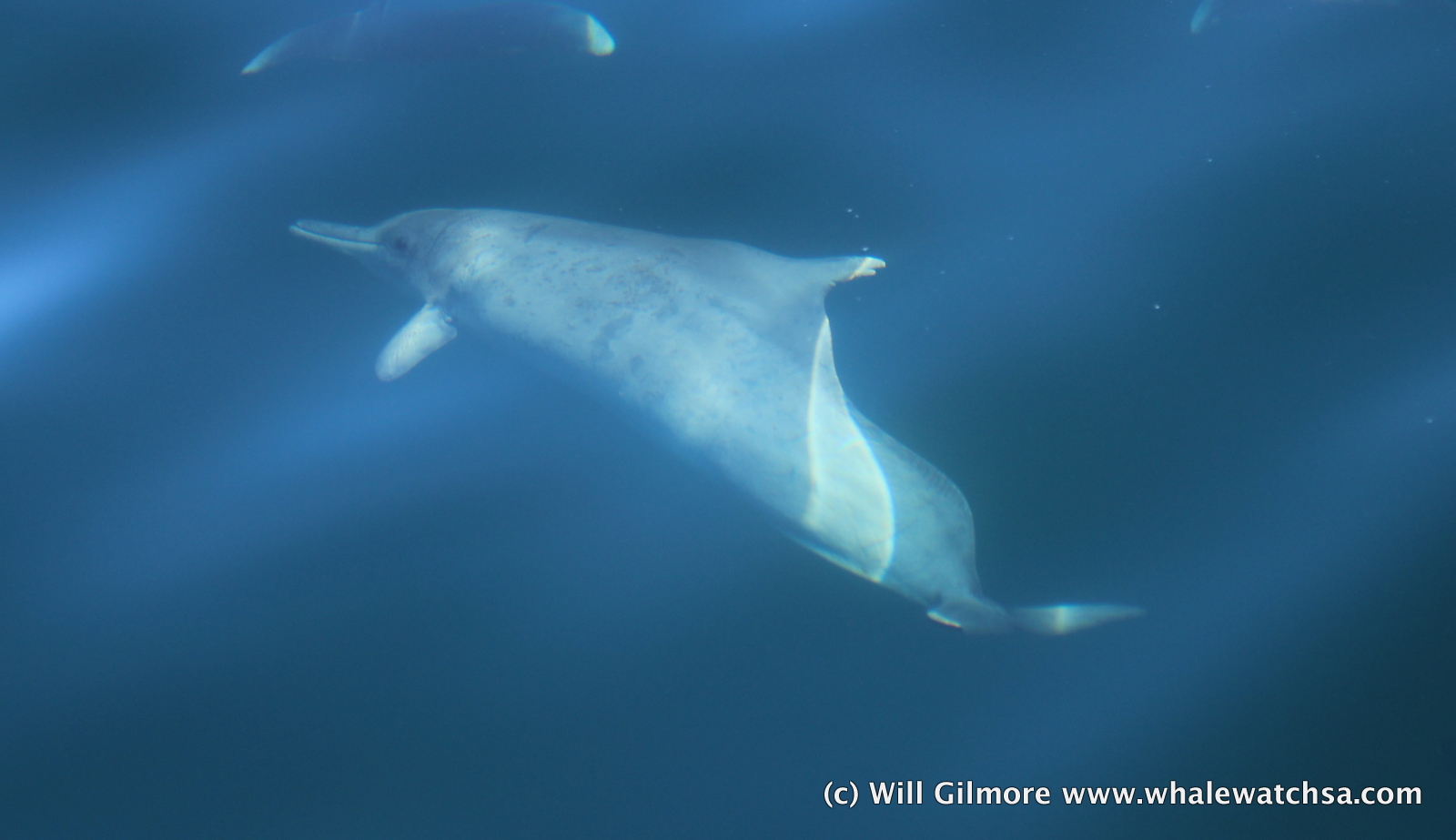 On crystal clear waters, we left Kleinbaai Harbour on our marine adventure through Dyer Island Ecosystem. This system plays host to a variety of sea life, some of which we spotted today. The first sighting was of a large pod of around forty bottlenose dolphins, these guys have been loitering in our bay for last few days and was lovely to be able to see them again. The dolphins were very active, coming very close to the boat and even began to bow ride. Amongst the commotion of the bottlenose, we spotted a lone Indian Ocean Humpback Dolphin. This particular species is known for hanging out in our bay due a natural estuary that acts a nursery for fish species on which it feeds. The humpback dolphin is our rarest coast whale and dolphin species, an estimated 500 individuals may reside in the bay. We spent a lot of time with the animals and unfortunately had to continue the tour without our new dolphin friends. This was not our last sighting however, we had just stopped to point out a lone African Penguin we a crew member saw a few more humpback dolphins playing in the surf towards the beach. We did not spend long as the dolphins we in very shallow water and quite sporadic with their movements. Our next stop on the voyage was at our sister company, Marine Dynamics, where we hope to catch a glimpse of the awesome jaws that made this area famous. Luckily, within a few minutes of arriving, a great white shark arrived at our vessel, leaping out of the water to try and catch the bait handler unaware. Fortunately, the shark did not grab the bait but did try again a few more times giving some excellent views of the animal.

Our next stop was Sponge Bay at Dyer Island where we tried our best to point out a little African penguin. Fortunately for us, we spotted a trio of birds waddling around the island. It is sometimes incredibly hard to point out these birds as there are currently less than 1000 breeding pairs left on Dyer. We soon left the bay and moved into shark alley to say G’day to our 60,000-strong cape fur seal colony. The seals were as playful as ever both in and out of the water. While at the island, a few giant petrels were seen patrolling the mouth of the alley, probably in search of their next meal. The giant petrels are large scavenging sea birds that tend to feed on floating carcasses of marine mammals, particularly the fur seal pups, which there is no shortage of in our system. We then moved out behind the island in search of our largest member of the big 5, but we had no look in spotting that elusive whale spout. However, there was a variety of sea birds on the way back to the harbour, including some giant flocks of Corey’s and Sooty Shearwaters, as well as many beautiful cape gannets.