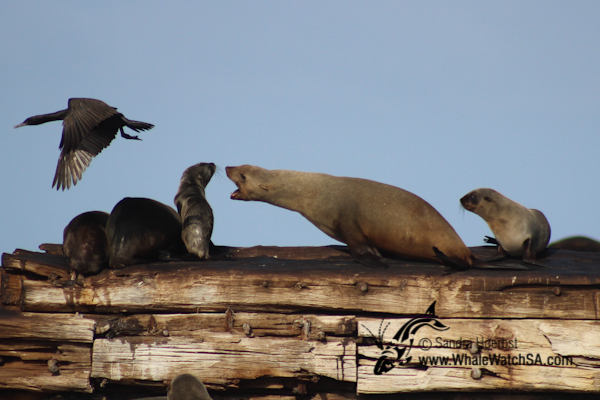 Unfortunately, the whales were a little elusive on today’s trip but we were still able to see a couple of interesting sights  as we made our way around the bay on this slightly windy winter morning.

We launched from Kleinbaai Harbour and set off along the shallows, hugging the coast before moving along The Clyde. The Clyde is a shallow reef system that runs all the way from the mainland to Dyer Island. The reef is given away by the extensive Kelp forests which sit just below the surface of the water. These forests hold an amazing variety of animal life and provide a refuge for both predators and prey, such as our Cape Fur Seals who use the kelp to hunt.

After cruising along The Clyde, we found ourselves at our resident seal colony, who call Geyser Rock their home all throughout the year. These seals can live up to 25 years of age and weigh up to 300kg which makes for a pretty hefty animal. Amazingly, they travel around 180km offshore to find food, with their diet consisting mostly of schooling fish. We spent some time with the seals today, watching them nap on shore and play in the water before we moved towards Danger Point.

Next up, we spotted a Southern Giant Petrel flying just in front of Dyer Island. These birds breed later in the year, around the months of October and November on Sub Antarctic Islands, fledging at the end of March and then spending up to 3 years at sea before returning to land.

Following this, we took a stop by Danger Point, made famous by the sinking of the HMS Birkenhead and then we slowly cruised back to shore.

On the way we spotted an African Penguin in the water. These little torpedoes in tuxedos can reach a speed of up to 20km//h whilst swimming which more than makes up for their clumsiness on land. A little later on we spotted some more penguins feasting on a bait ball close to the harbour. The Penguins were joined by some Cape Cormorants as well as a couple of Swift Terns, who were all trying to get their share.

This was the last sight of the day and we head back into the harbour, all eager for some nice warm soup after a morning on the ocean.