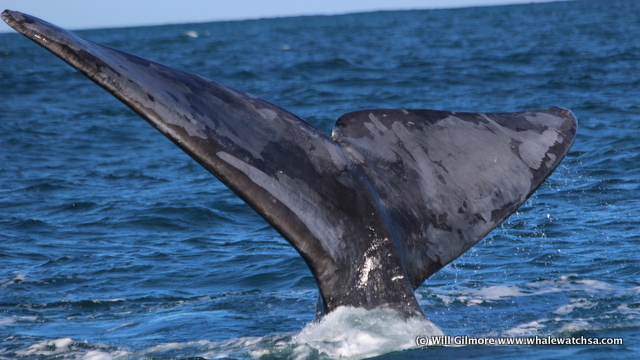 Recently, due to some inclement weather we have been forced off the sea only to watch the waves crash over the harbour. Today, however was a beautiful and sunny day without a single cloud in the sky. Filled with excitement and anticipation, we set out in search of the Marine Big 5. We did not have to wait long for the first of 5 to show itself, two indo-pacific bottlenose dolphins. The two dolphins were quite elusive, moving sporadically in different directions which indicated to us they may have been hunting, we stayed with the animals for a while and out of nowhere our second species of dolphin appeared in the swell, a humpback dolphin. This dolphin was only spotted once, we continued the tour and moved into shallower waters.  Just as we began to approach the shark diving vessel, our spotter Kira, noticed a group on Indian Ocean Humpback Dolphins frolicking in the surf, one individual breaching quite a number of times. Unfortunately, we were unable to approach further as we were already in less than four meters of water. Our next sighting was the one we had been missing from our tours for the last few weeks. The Great White Shark. As we pulled up next to Slashfin, a dark shadow appeared from the murky depths to check out the bait line. After the shadow had move passed we had to move on as not to interfere with their operation. Seeing the white shark was unbelievable as we have been without white sharks for over two weeks and not sure when they would return.

We continued out marine adventure towards Pearly Beach in search of the iconic Southern Right Whale. Firstly, we had to pass over De Clyde where we spotted a little lone juvenile penguin. Juvenile penguins are often known as blues due to the deep navy colouration of the bird before moulting into its adult feathers. We did not wish to disturb the penguin so we left him be and headed towards Pearly. We continued past pearly for quite some time, our skipper thought he had seen a spout in the distance so we carried on in that direction. It was then one of the guides on board saw the whale floating at the surface. A southern right whale, the first whale of the official season. We began to watch the whale just lulling on the surface taking breaths at regular intervals. This whale was clearly an adult and presumed a female due to her colouration. She was what we call a “partial grey” or “half brindle”, this is identified by the grey mottled patches on the back of the animal. So far, only females have been identified as partial greys and it only effects 10% of the female population. Out of nowhere, another black whale surface next to our partial grey, both were extremely relaxed and came very close to our vessel. We watched them for a long time and then even managed to show us their flukes, making for some great shots. Unfortunately, we had to leave the whales behind as we had to continue with our tour. The next sighting was on the way to the island, a small Mola Mola was see just in front of the boat. Mola Mola are the largest bony fish in the world reaching lengths over 2 meters. This fish was even seen feasting on his favourite prey, the jellyfish before it took a deep diver and disappeared. To cap off the big 5, we headed into shark alley to say G’day to our 60,000 cape fur seals. These seals were to be the last sighting of the day and we headed back to the harbour the great memories of an amazing trip.