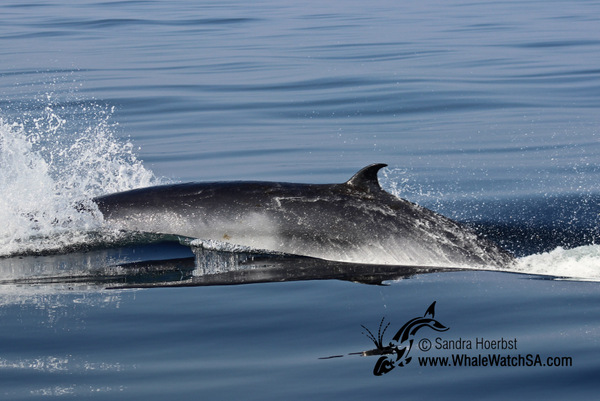 On World Ocean Day, the 8th of June, the ecotourism guests aboard Dyer Island Cruises’ vessel Dream Catcher, were treated to a most-amazing ecotrip!

Marine biologist/guide, Sandra Hoerbst, was fortunate to be on the vessel and said, “We truly had an amazing day at sea, with the Marine Big 5 and more. Today was a perfect day to be out at sea, the water was like a mirror and no wind was blowing. We were slowly heading along our stunning coastline to look out for some humpback dolphins, and we were lucky to find them. They were jumping in the swells, lobtailing and hunting for fish. After watching their playful behaviour we headed out to deeper water, to see what else we could find. First we spotted some African penguins and luckily one of our clients spotted a blow…we stopped the boat to have a closer look.  She was right, there was a Bryde’s whale that we slowly approached and saw that she was accompanied by her calf, traveling towards Quoin Point. Whilst busy watching these whales traveling alongside our vessel we spotted some splashes a bit further off.  So we left the mother and calf pair behind and were amazed by what we encountered!  A much smaller whale, although similar looking to the Bryde’s, porpoising at a speed of 17-20km/h!”

When back at base, the photographs were shown to Meredith Thornton, the Research Coordinator for the Dyer Island Conservation Trust, who reported that she was about 70% confident that the animal was a dwarf minke whale (Balaenoptera acutorostrata subsp.).  Meredith has worked with whales and dolphins for more than 25 years and has seen numerous minke and dwarf minke whales, but she was not at sea with this animal herself and it was too fast-moving for proper photographs of the shoulder region, which would confirm the species ID.  “This is an exciting encounter for this area as they haven’t been recorded here before, although we suspect that they occur throughout the southern African sub-region”.

Dwarf minkes are usually shy, fast-moving whales, with erratic surfacing patterns, but can be attracted to stationery vessels, often circling them at a close distance for many minutes at a time.  They are usually 7-8m in length, characterised by a c-shaped pale grey colouration in the shoulder area and a small dolphin-like dorsal fin.  Dwarf minkes were even caught during the time of whaling at the Durban whaling station, but numbers were very low so we don’t think that the population was heavily impacted – they are very small animals and not rich in the blubber and meat that was sought after during that time.

The most interesting thing about dwarf minkes is their vocalisations.  Their call has been termed the Star Wars vocalisation and interested readers should definitely search online for a recording of their call.  As a whale biologist, Meredith clearly remembers the first time that colleagues of hers discovered the call and emailed it around the world, “It was mind-blowing, the call was completely unexpected for a baleen whale and sounded so synthetic and unlike any other whale sound I had heard before!

This sighting goes to show that unless we are out there on the water regularly we are just not going to see and experience the unusual or unexpected species that are around.  Our oceans still hold so many secrets and stories just waiting for us to discover!”

Daily blogs of sightings are available on www.whalewatchsa.com