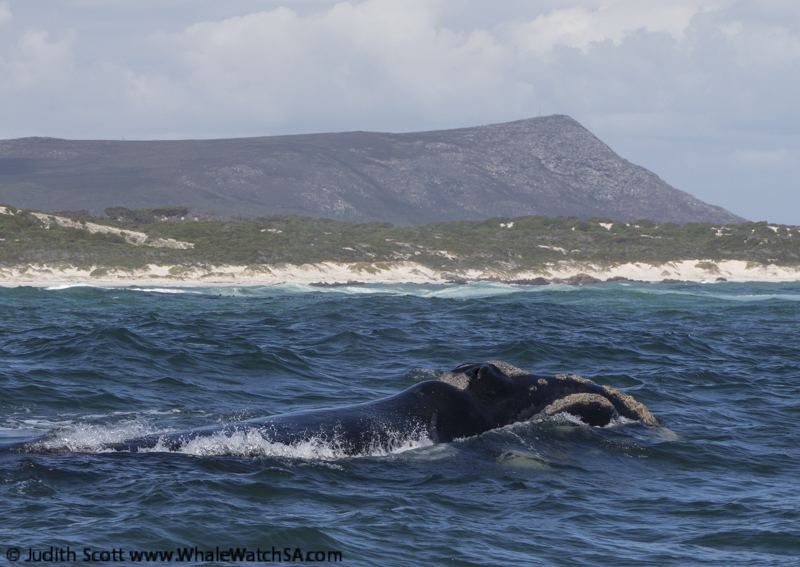 Southern right whales attract thousands of visitors every year to experience these gentle giants off the South African coast.

The southern right whale (Eubalaena australis) is identified by the callosities on its head, and lack of a dorsal fin on its back. They have a circumglobal distribution in the southern hemisphere and are mainly found from Saint Helena Bay in the west to Gqeberha (former Port Elizabeth) in the east along the South African coast. When southern right whales are sighted, either at sea or from the coast, their identity is often facilitated by their ”V” shaped blow, due to the positioning of their two blowholes.

As these friendly whales are often close by, a long lens is not necessary to capture these animals but add a polarized filter to capture their shape below the sheen of the water. We do our best not to disturb these animals’ natural behavior, but if they become curious and choose to come close, you will capture some truly magical moments.

Our whale spotter offers his insight on the beautiful and photogenic, southern right whale.

Locations – Where do I find Southern Right whales?

They spend approximately half of the year (roughly December until May/June) in the Sub-Antarctic regions where feeding is their main objective. Following their time spent stocking up on fat reserves, southern right whales migrate north between 3000-4000km to their mating and breeding grounds of South America, South Africa and Australia. These whales are most commonly found along the coastlines in South Africa between July and November.

Identification – What does a Southern Right whale look like?

Southern right whales are large whales between 14-16m in length that can weigh up to 80 tonnes. These whales lack a dorsal fin, unlike most large whales and are predominantly black with variable white patches on their belly. One of the most distinguishing features of southern right whales is the massive head covered in light coloured callosities. Callosities are simply rough patches of skin which are inhabited by barnacles and large numbers of whale lice. Each whale has a unique pattern of these callosities and are used for individual identification. The whales have large square-shaped flippers and a large fluke that can reach 6m in width.

Behind the name – Why are they called right whales?

These whales got their name historically from early whalers, who determined that these were the “right whales” to hunt, both for commercial value, but also for their ease of hunting. Southern right whales were an easy target due to the relatively slow average swim speed and they tend to spend a significant amount of their time at the surface to rest or log. Populations plunged significantly starting in the late 18th century, right into the 20th century. Now they are considered the “right” whales to watch, again due to their fondness of the coastlines, and for their slow swimming speeds.

Because they were the right whales to catch, the Southern right whale population plunged significantly starting in the late 18th century, right into the 20th century. The whales were initially killed via traditional harpooning but whaling modernized in the early 20th century and boasted steam powered boats with harpoon cannons, further facilitating the decline of the whales. The southern right whales became internationally protected in 1935, but numbers were at a drastic low prior to this. In 1997 the South African population was estimated at 3100 whales, from a total of 7500 in the southern hemisphere, still only thought to be about 10% of original numbers.

Diet – What do they eat?

Feeding is only thought to occur while the whales are in their feeding grounds. The main food source for southern right whales is zooplankton (such as copepods and krill). Although their prey is very small in size, they tend to aggregate in dense groups in the Antarctic waters, facilitating mass feeding opportunities for the whales. Southern right whales do not have teeth, but instead have long baleen plates hanging down from their upper jaw (similar in theory to vertical blinds). They can have more than 200 of these baleen plates on each side, which can be up to 2.8m in length and have a fringe of hairs running down their sides. The whales swim into the swarms of prey with the mouth open and to filter out the water they close their mouth and use their tongue to push the water between the hairy baleen plates (like a sieve) having their prey trapped inside.

Lifespan – How long do they live?

Southern right whales are thought to be fairly long-lived, up to 100 years!

Reproduction – How often do they have calves?

Most females have been observed to have a three-year cycle (one year of pregnancy, up to one year with the calf, and one year to recover and rebuild fat reserves in preparation of a new cycle). However, long-term monitoring of the South African southern right whale population has revealed an increase of calving intervals within the last few years from a three-year to a four- and even five-year calving interval.

Fun Fact: Southern right whale testes are the largest of any animal and weigh easily 500kg each and up to 2m long. Interactions between male involve little aggression during the mating and therefore suggesting sperm competition.