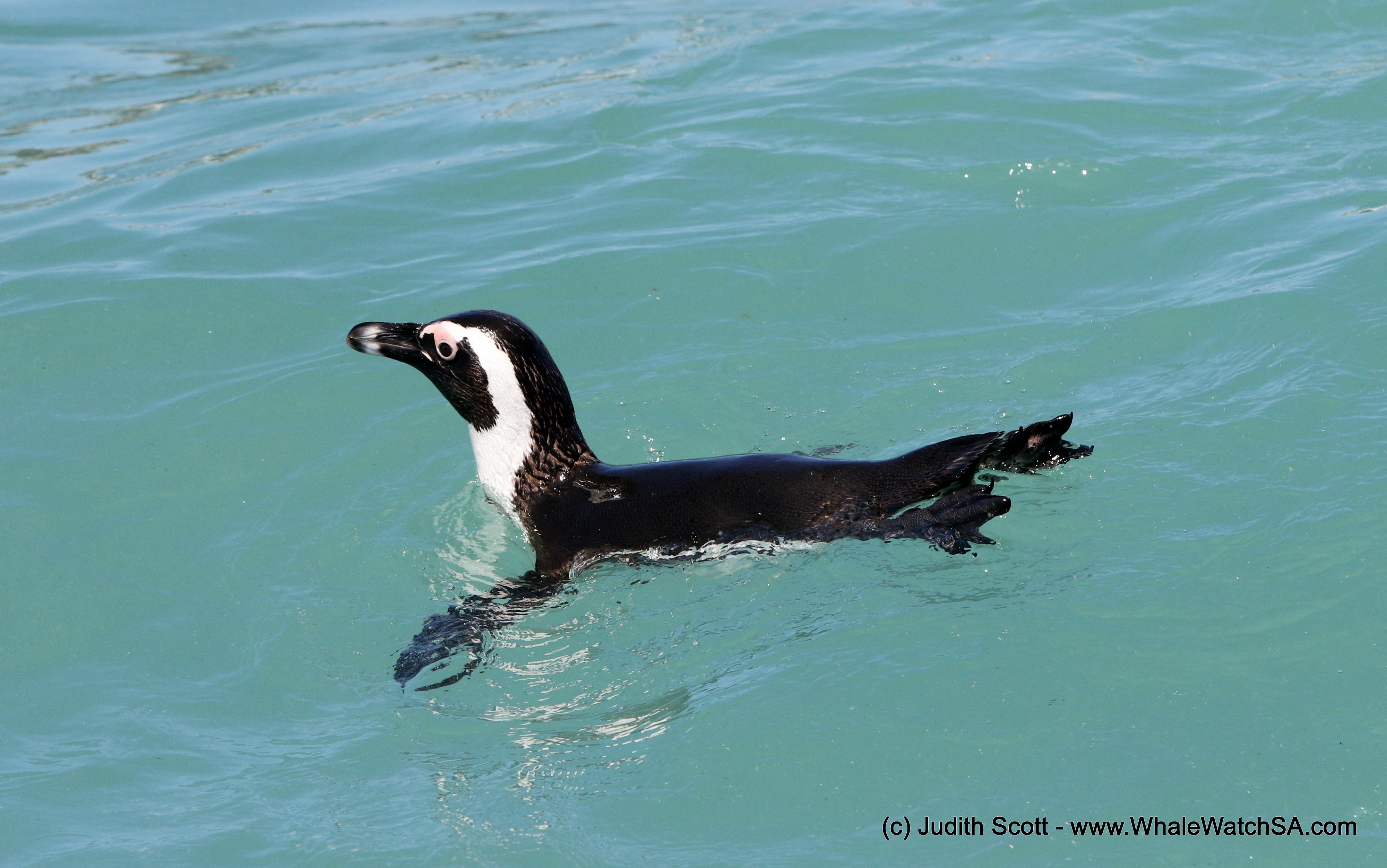 As one of only 17 penguin species left in the world (and the only one on the african continent), the african penguin often breed in offshore colonies, such as Dyer Island.

The African penguin was preivously known as the "Jackass" Penguin, due to it's recognisable, donkey-like bray.

If possible bring a long lens with you when wishing to photograph the african penguin.

While some rafts may come close to the boat, they often like to keep their distance, and a long lens will help you capture a decent level of detail even when further away.

Biology and reproduction – What are key characteristics of the African Penguin?

There are only 18 penguin species worldwide, and the African penguin is the only one that breeds on the African continent. They are considered “endemic” to, or only found in, Namibia and South Africa. African penguins are only 70cm tall and reach sexual maturity at around 4 years old.

African penguins can swim up to 20km/hr, travel 20-40km in a day, and have been recorded at 180m depth!  They breed mainly at offshore islands in “colonies.” Dyer Island is one of these offshore areas and is located 8 km south from Kleinbaai harbor.  Breeding season begins in January when males return to their previous nesting areas. They defend their nest while they wait for their female mates to arrive. African penguins mate with the same partner year after year.

African penguins typically lay one to two eggs which, if successful, will hatch in March. They can then lay a second clutch in May/June. If the egg is lost, they may lay another clutch in March and if that clutch is also lost, they may lay again in May/June or even August/September. It is this determination to breed successfully that was exploited by egg harvesters in the 18th and 19th centuries.

Conservation – Why are the African penguins in trouble?

The total African penguin population took a nose-dive in the 20th century by 90%, the two main culprits to this demise were egg harvesting and guano scraping. Marine pollution further exacerbates this decline.

Guano scraping was the removal of nutrient rich bird droppings from bird colony areas which was then sold as fertilizer internationally. African penguins naturally burrow into the guano layer to form nests. These burrowed nests keep them insulated from heat & cold and protected from predators. On Dyer Island, the guano layer was 4-6m thick! Because guano scraping was such a profitable business, many of the guano islands are now barren rocks with a layer only centimeters deep. Penguins must now nest on the surface in shallow pits which exposes them to harsh weather conditions, flooding, and predators.

Egg harvesting occurred up until the 1960’s. Penguin eggs were considered a delicacy in Europe, and the demand for them was very high. Because penguins will lay new clutches if the first egg is unsuccessful, many pairs were pushed to their limits constantly laying new eggs as the harvesters took them away. Imagine, in one year, over 590,000 penguins eggs were harvested from only one island! This impact is immeasurable.

African penguins are highly susceptible to marine pollution, especially oil. While massive oil spills are ecological disasters, the penguins of Dyer Island are constantly plagued by mini-spills caused by oil tankers passing the region in the deep sea. Here, out of sight and out of mind, these tankers illegally clean their oil containers into the sea. Once this oil reaches our shores, the culprits are long gone but the damage has been done. Oiled penguins can drown, cannot feed, and need to be collected and rehabilitated. This disruption can offset breeding success for a penguin pair for many years.

Fun Fact: The african penguin is the only species of penguin which is endemic to the African continent.