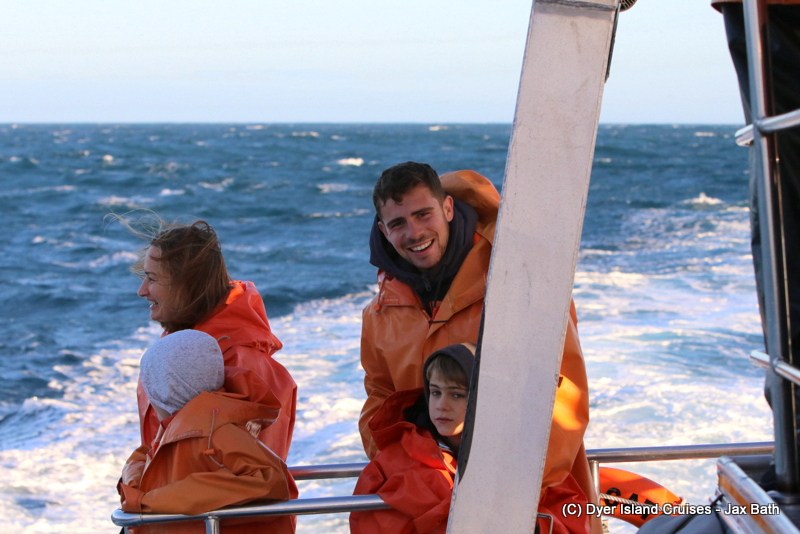 Trip 1 began with us heading towards Danger Point where we had a look out for the spout of a whale. Kira, our eagle-eyed spotter managed to find a Brydes Whale who appeared to be moving with the swells, almost surfing as it came up for the occasional breath. Although a little tricky to watch, some of us were able to get a couple of views of this elusive animal before we moved on to the world-famous Shark Alley to view our resident Cape Fur seals on Geyser Rock.

The seals were loving the sunshine and were playing in the water, some of the juveniles were curious enough to approach the boat, practising their diving and swerving, enhancing their hunting skills.

Moving on to Dyer Island, out African penguin colony was a hive of activity today, a few of them were spotted waddling up and down the rocks, whereas others, were seen snoozing in the shade.

We went on to see if we could spot the Great White shark, passing our sister company Marine Dynamics who were anchored in the shallows.  We were fortunate enough to sight two juvenile male Great White sharks this morning. The sharks were elegantly circling the boat in slow, smooth motions. Excitement ensued as we witness the awesome beauty of these gentle predators.

Our second trip started with a sighting of a Sunfish that came very close to the boat to give us a glance of its dorsal fin on the surface for a little while before it dived. Very quickly after this, we spotted one of our African penguins, fishing for some lunch.  It’s wonderful to see this beautiful endangered penguin hunting at sea, we hope to spot many more as we work to build their population. We were also lucky enough to see the awesome 2m wingspan of the Sky Albatross, swooping and swerving around the boat. Our trip then led us towards our colony of Cape Fur seals enjoying their midday swim, cooling their flippers in shallow waters Shark Alley.

Trip 3 began with a trip to Geyser Rock. Worryingly, a seal was spotting playing with a piece of plastic, a very hazardous toy for a young seal. Turning towards Dyer Island, we saw our African penguin colony, sunbathing on their bellies in the afternoon sun.  The penguins looked to be enjoying the calm of afternoon sunshine. Moving away from the islands, we were circled by a beautiful Shy Albatross.

We then moved closer towards the shallow waters, where our sister boat Slashfin was anchored.  We were lucky enough to see a Great White shark showing an active interest in the seal decoy and bait-line, putting on a great show for both us and the shark cage divers.

Our final trip of the day began back in the shallows, where we started the trip with an impressive Great White shark sighting.  Shortly after leaving the shark cage diving vessel, we sighted our first Southern Right whales of the day!  A pair of Southern Right whales, moving slowly through the waters.  We could identify them by their distinctive v-shaped blow and the white callosities on their faces.

We ended our trips with a final visit Shark Alley were we were able to admire our 60,000 strong population of Cape Fur seals as well as a stop at Dyer Island to catch a final glimpse of our delicate population of African penguins. 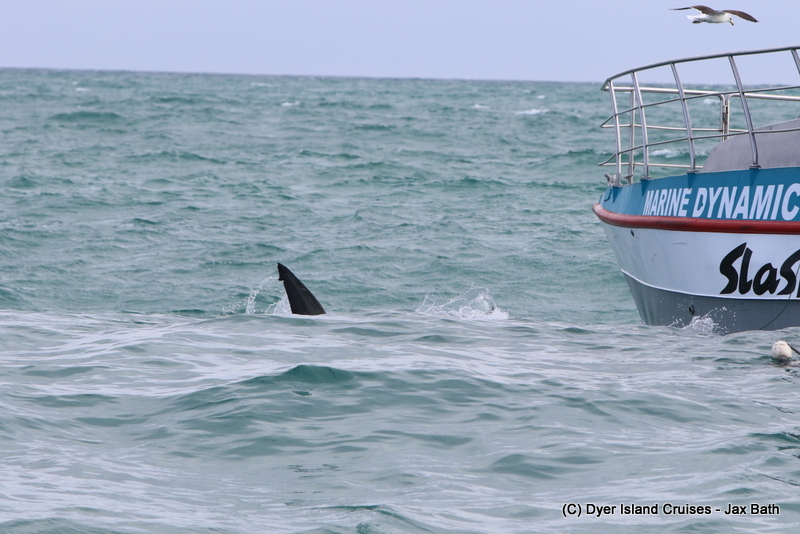 The tail fin of a Great White Shark. 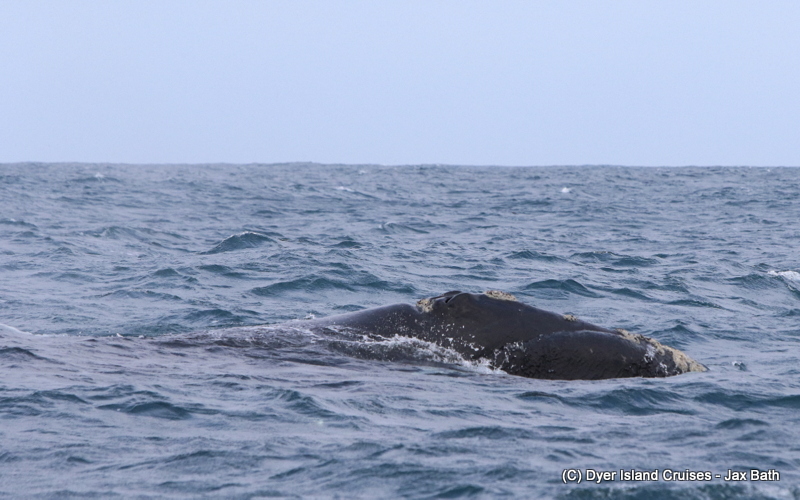 A beautiful Southern Right whale on trip 4, these whales are fairly skinny, with very little fat behind the head. When these whales have more of a hump behind the blowholes, we consider that good condition. 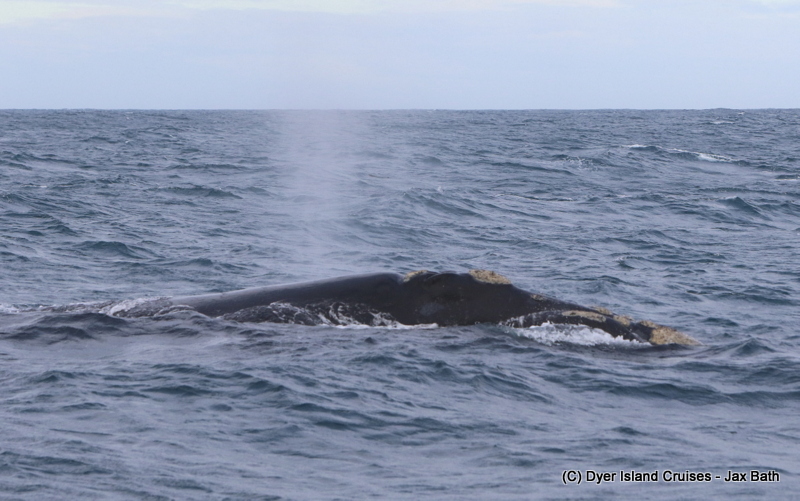 We believed these to be two mating adults. 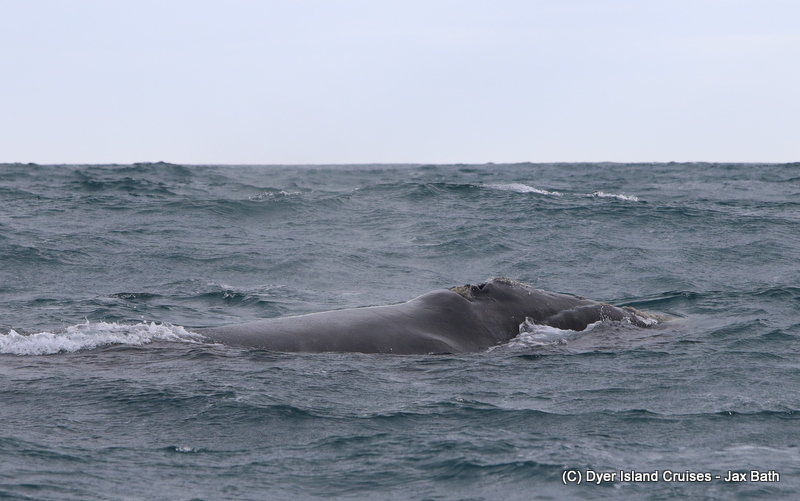 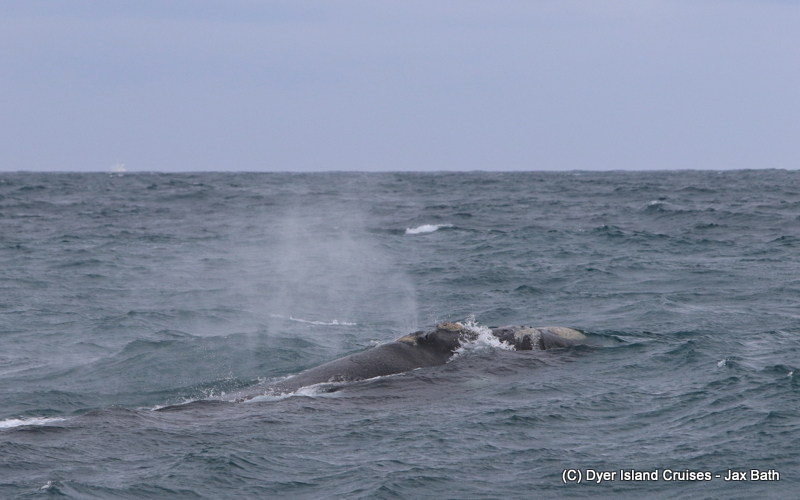 Surfacing next to the boat. 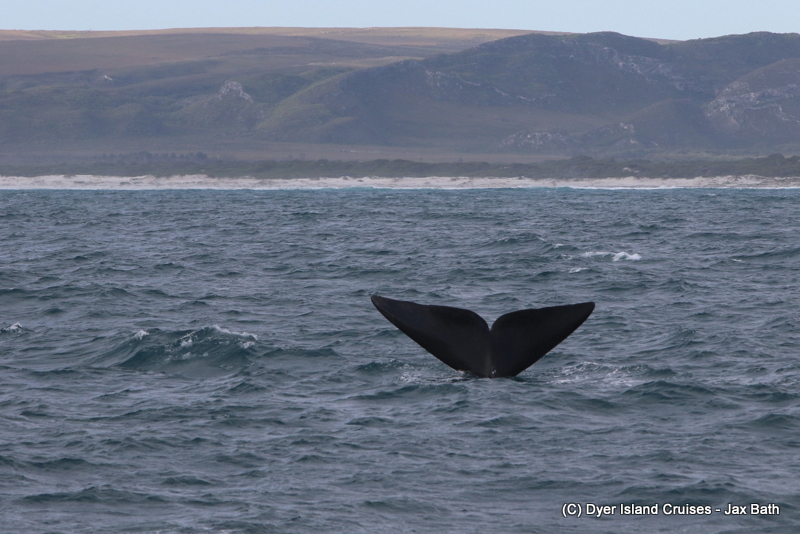 We got some tail action right at the end. 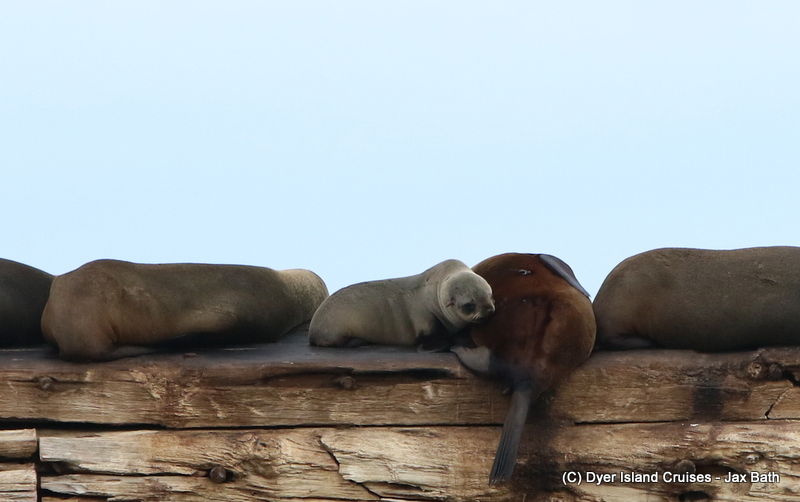 A little seal hoping to nurse, but mom is trying her best to wean her pup off the milk. 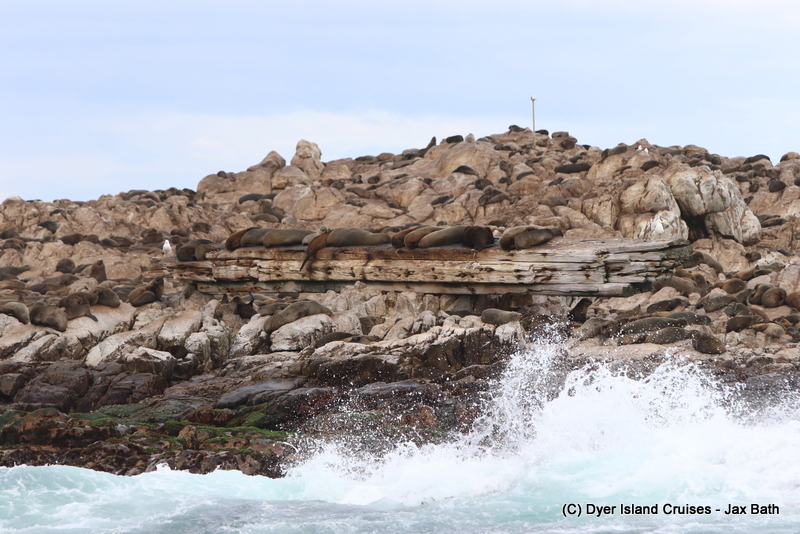 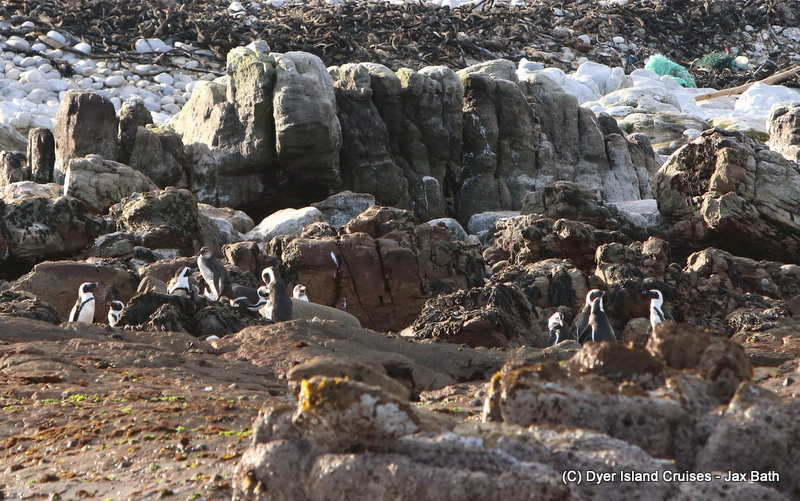 Penguins about to head out fishing. 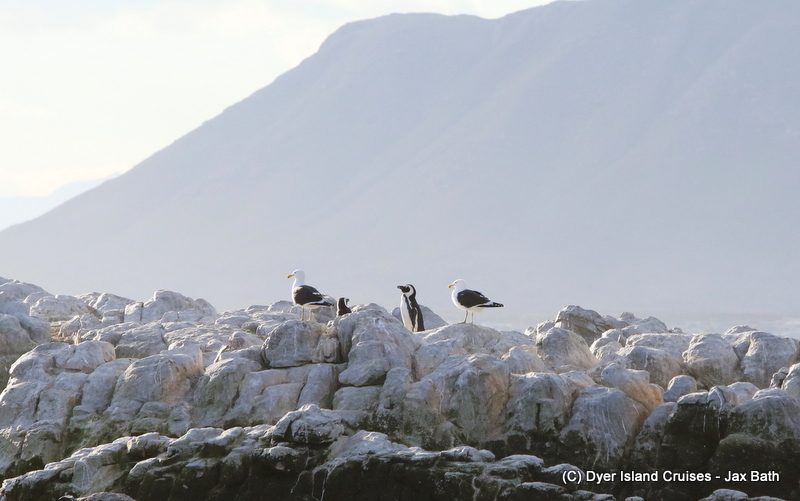 The penguins of Dyer Island. 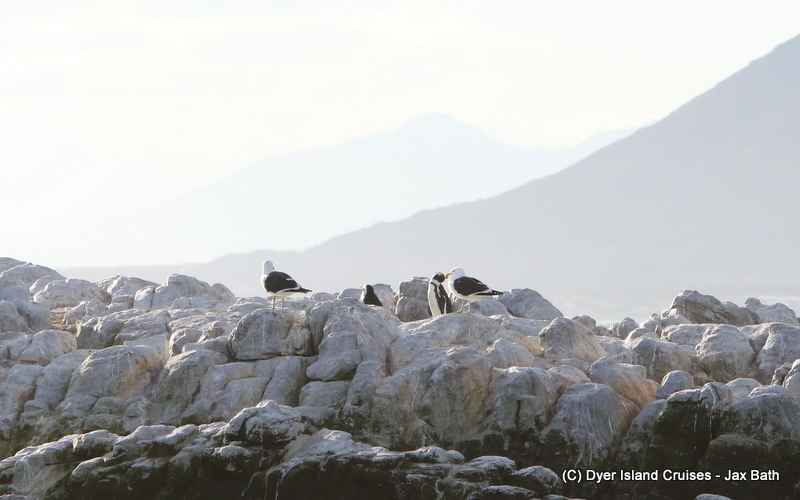 It looks like the penguin and Kelp Gull are sharing a tender moment in this photo. This just goes to show how photos can often misrepresent a scene. 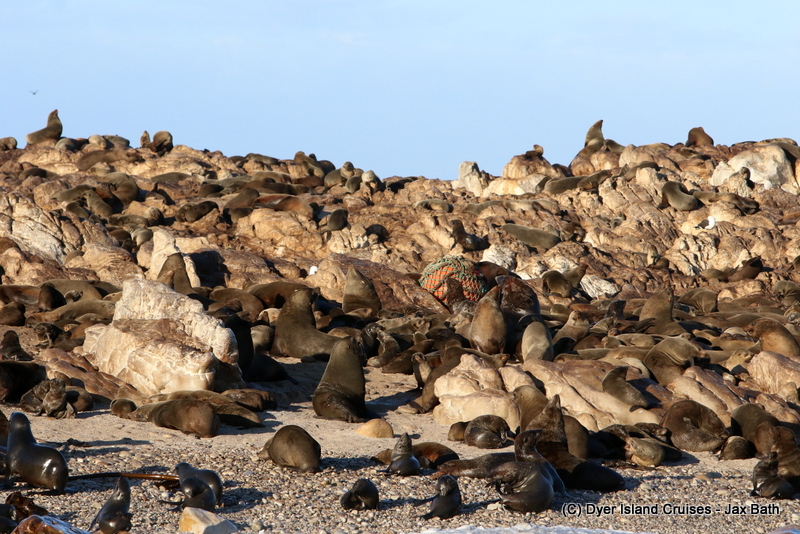 Seals hanging out on Geyser Rock. 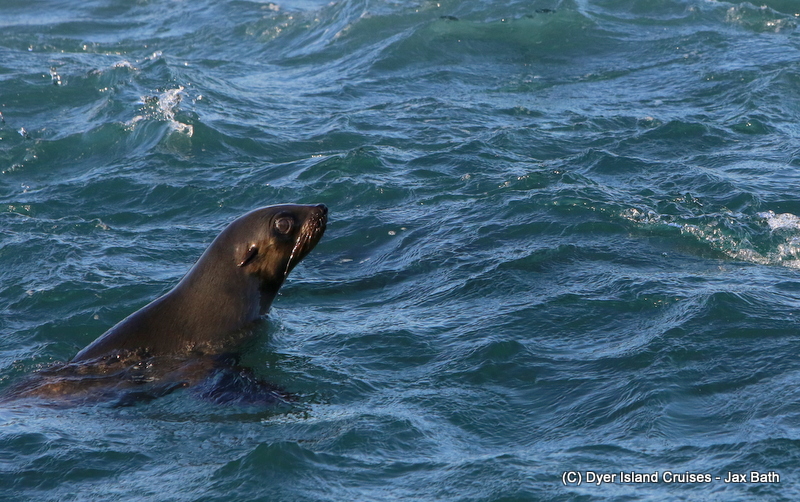 A little seal having a swim. 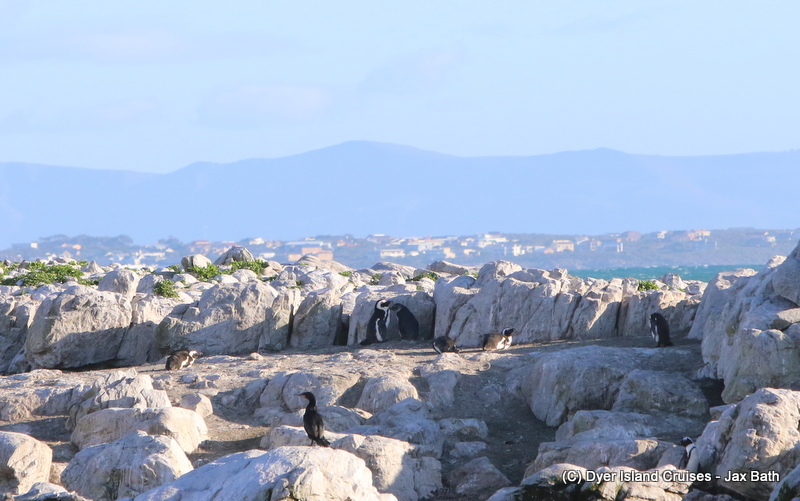 Penguins sitting on a ledge in Sponge Bay. 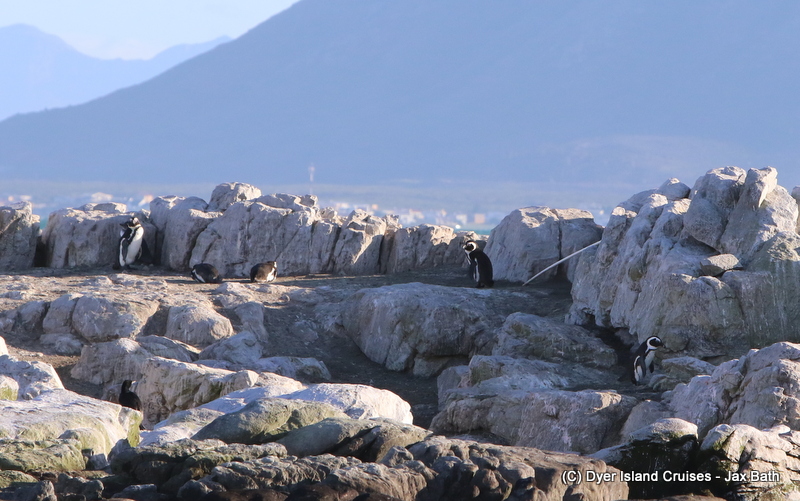 When the penguins are sitting here, it’s always fascinating to watch them interact. 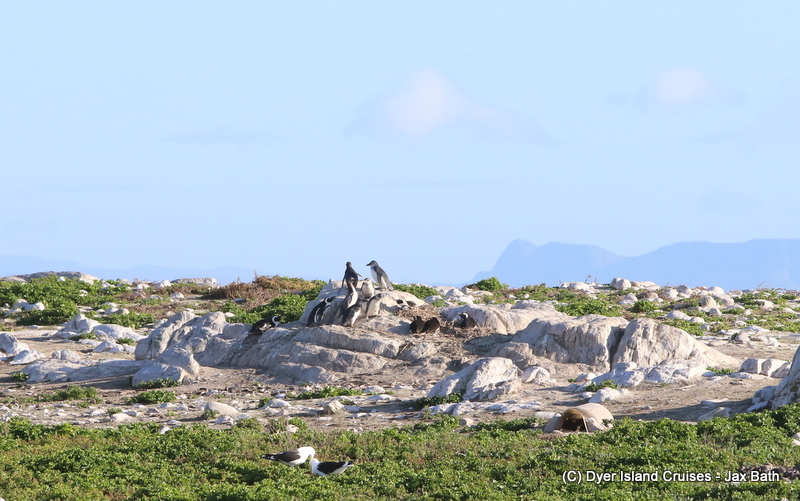 Some more penguins nesting at the very top of Dyer Island. 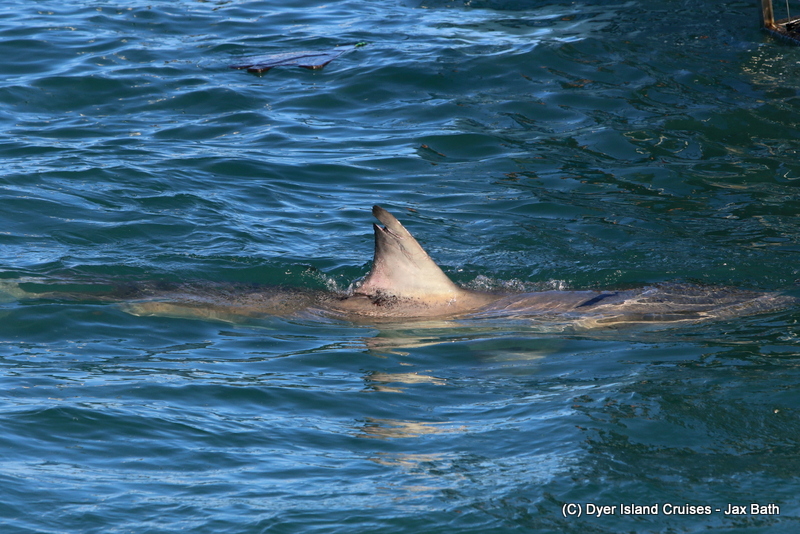 A very active Great White shark we’ve had around the boats recently. 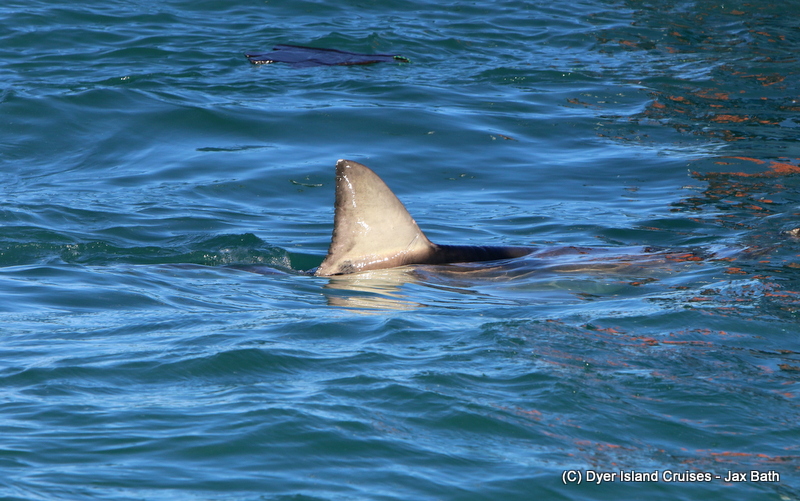 Here, you can see why we identify the different sharks using their dorsal fin. The fin above is so different from this one. 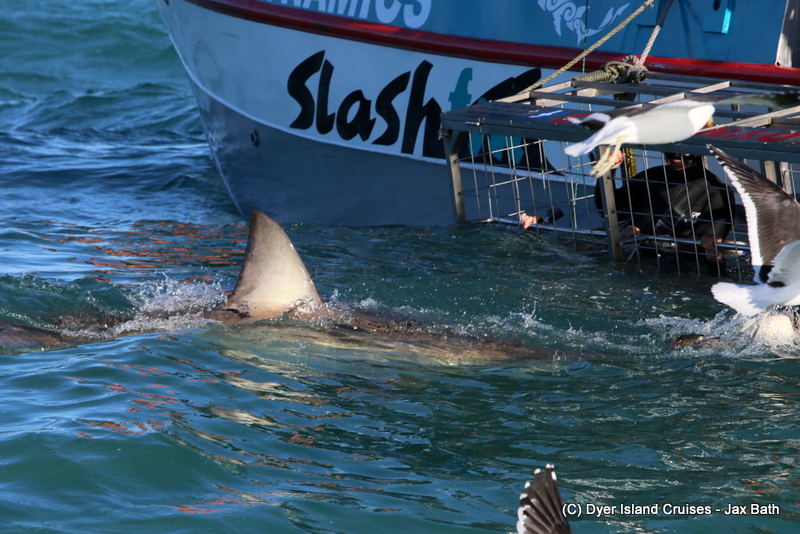 One last look at a Great White shark.