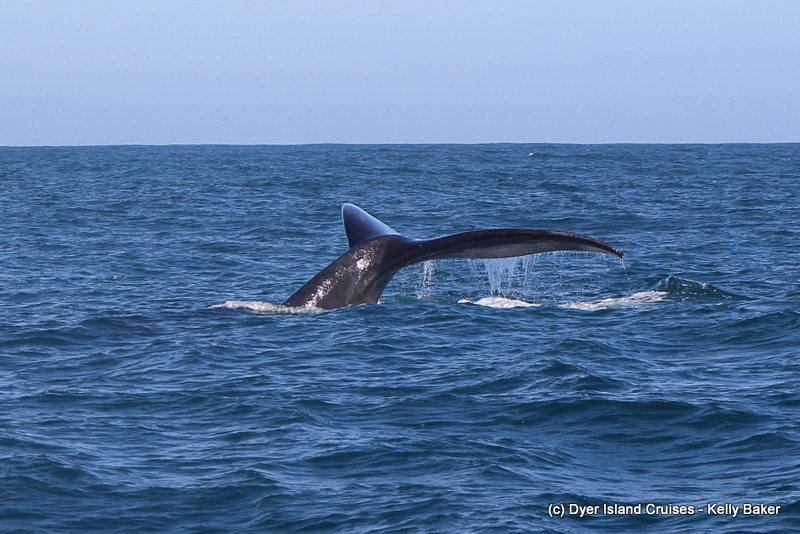 A fantastic Friday spent on board Whale Whisperer as the Dyer Island Cruises team and guests spent three hours moving through the waters of the Great Dyer Island area. Once launched we made our way through the shallow section of the bay along the coast in the search of some Humpback dolphins, however much like the previous few days we unfortunately did not encounter any.

Soon after we found ourselves next to our sister company, marine Dynamics, who were enjoying a successful morning of shark cage diving. Perfect timing on our behalf as not one but two great White sharks were seen. A feisty juvenile female, launching herself out of the water and a much larger female that glided effortlessly under our boat before disappearing into the depths.

We had our fill of fish sightings and left the shark vessel heading in the direction of the island system. On the bird colony of Dyer Island we saw a nesting African penguin that we have been able to spot the last few weeks, yet due to their small stature and sheer lack of numbers it really is quite hard to see them nicely, luckily later in the trip we came across a solitary and raft of penguins in the water.

The seal colony of geyser Rock proved as entertaining as always and we enjoyed some time watching the Cape Fur seals playing in the water and sunning themselves on the island.

A quick stop to pick up some Bull kelp for our guests to have a closer look at this ocean plant that is so densely packed around this bay and for some even a little nibble of this salty treat before we were full steam ahead to the deeper waters in search of some whales.

We lucked out…a lovely path of footprints lead us to a Southern Right whale, happily cruising along for most of the time just under the surface, this is one of only a handful of sightings of this species this year so far! Not to end our whaley good sightings there we encountered a Bryde’s whale as we made our way back to harbor.

"Awesome trip with awesome guides - so worth taking the time to explore the Marine Big 5." 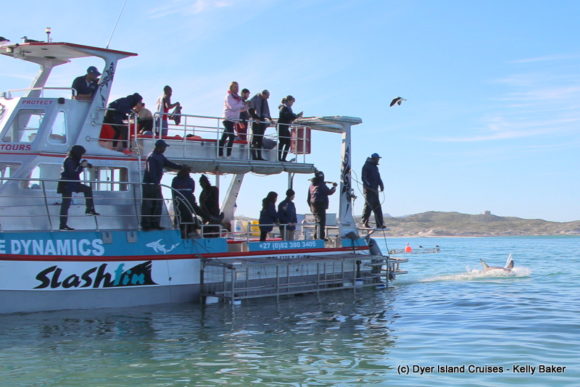 An estimated 2.8m female Great White shark launches herself out of the water at Slashfin. 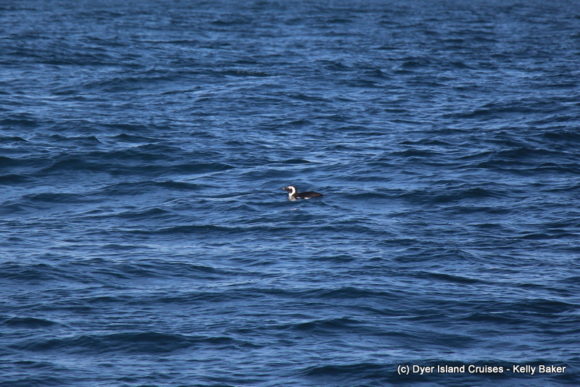 A solitary African penguin resting on the waters surface. 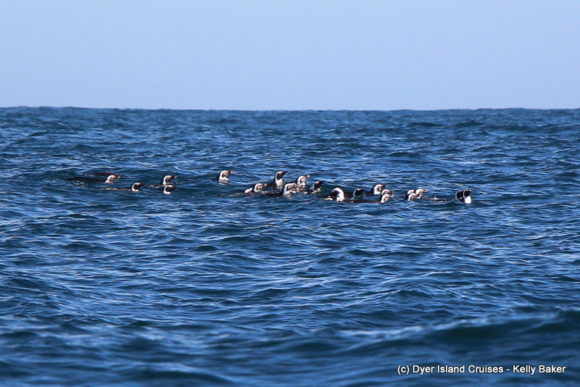 A raft of close to 50 African penguins out to sea for a feed. 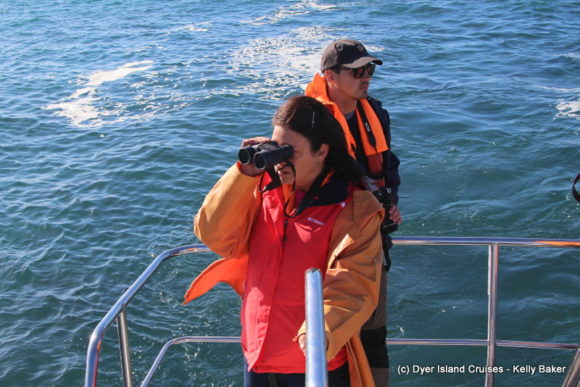 I spy with my little eye…is that a African penguin? 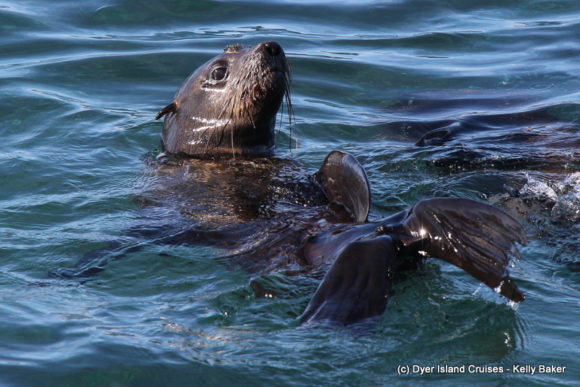 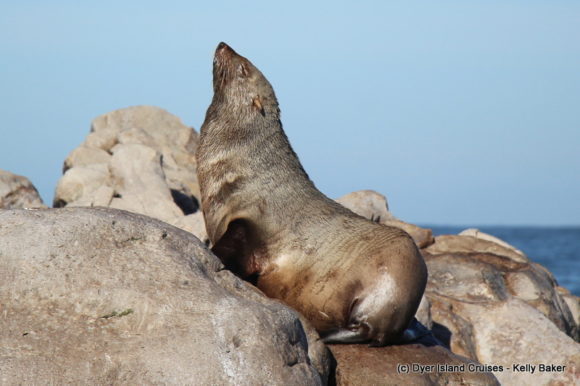 Looks like this Cape Fur seal has the right idea this bright Friday as it enjoys some sunshine. 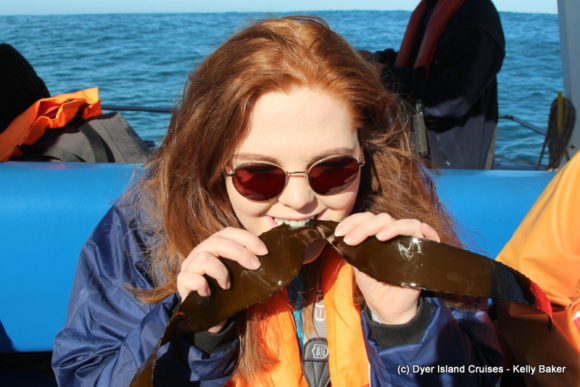 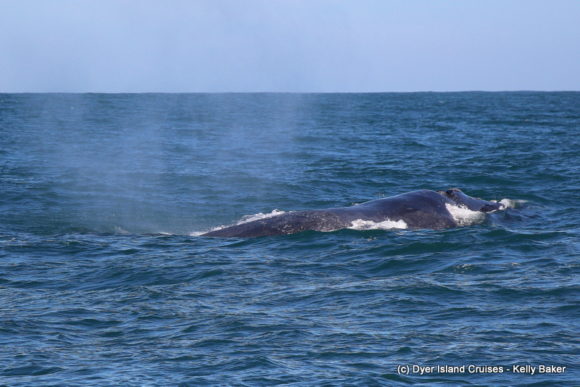 One of our first Southern Right whale sightings for the year. 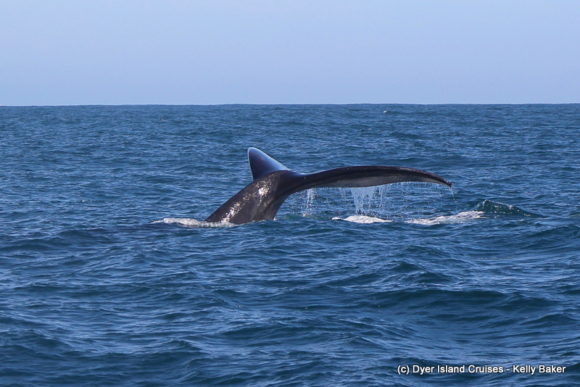 The stunning fluke of a Southern Right whale. 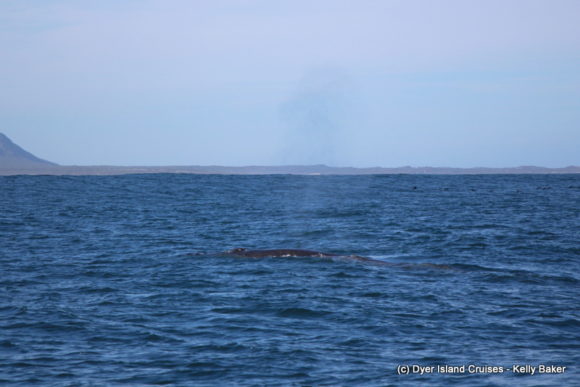 The blow of the shy Bryde’s whale.